Back when I was new to cycling, I thought of available speed as a gauge of bike’s quality. My first bike had 3×8 drivetrain, and soon after a family cycling trip in Pekalongan, I upgraded the drivetrain to 3×10 speed Shimano SLX. I believed it wholeheartedly that I was baffled when I saw Scott’s top range XC bike was sold with 2×10 drivetrain. Why 20 speed, if you can have 30? For the past 2 years, however, I rode 1×10, and didn’t ever think of going back.

Just like the conversion of my hardtail to a rigid bike, the decision to convert to single chainring setup was based mainly on the idea of simplicity.

It began when some of my riding buddies converted their bike to 1×10. Out of curiosity, I asked one of them about it. His answer forever changed my mindset. First, converting to 1×10 means ditching front derailleur, front shifter, a cable, and two chainrings, resulting in lighter, simpler bike. Second, without the worry about chain cross, converting to 1×10 allows him to remove the gear indicator as well, so he could focus on the ride better instead of constantly checking which gear he was using (he also recommended ditching the bike computer, but more to that later). That day, I was sold to his idea of simplicity.

I didn’t make the leap right away, however. Doubt still lingered my mind. What if one day I really need the granny ring? Instead of succumbing to the fear, I decided to challenge it. For two consecutive months, I rode around exclusively on the middle ring. It turned out that I didn’t need the granny ring, because my body adapted quickly, my legs and lungs grew stronger. Thus I bought myself a 32t narrow/wide single chainring, converted to 1×10, and never looked back. 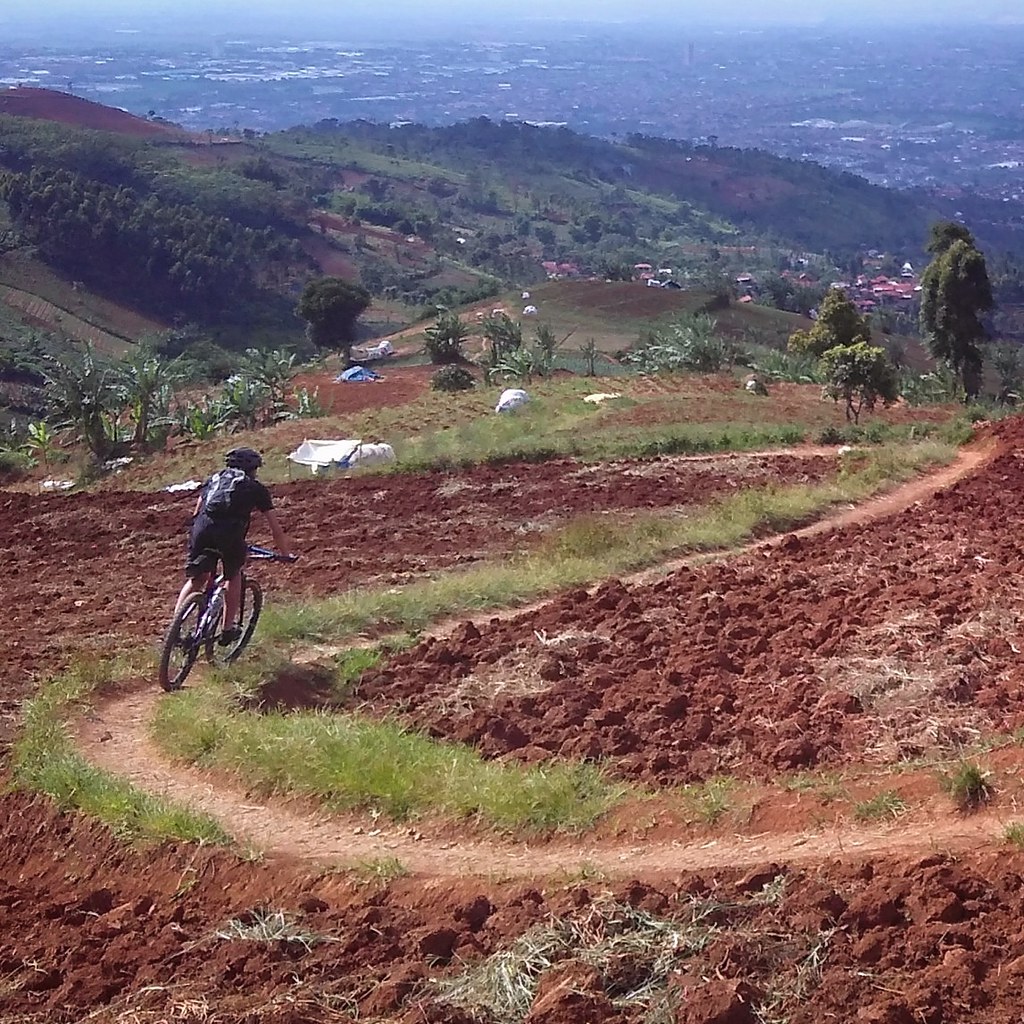 Why Not Fixed Singlespeed?

Of course, the emphasis on simplicity begs the question: why not go for the ultimate—fixed singlespeed? If I have to summarize my answer into a single word, it would be “versatility”.

Perhaps I’d go fixed-geared if I live and ride in a place like New York—somewhere with smooth, flat urban roads all over the place. In reality, however, often my type of riding included rough roads on hilly terrain. Fixed singlespeed setup is more likely to be a disaster.

First, about the fixed gear. Until today, fixed-geared mountainbike is an ultra rare-breed, for a good reason. Unlike riding on smooth tarmac, riding on rough offroad trail requires certain degree of maneuverability. An MTB rider has to constantly adjust his position on the bike to adapt to the trail, especially on rough descends. Such constant adjustment is impossible if one has to continuously spin one’s legs as the bike move forward. Fixed gear, therefore, is not an appropriate option for rough road riding.

The singlespeed part, however, is still a viable option. Some of my riding buddies used to ride singlespeed, and they did manage to keep up with multi-speeded cyclists even on uphill routes. However, they have all converted to multispeed now, again for a good reason. On hilly terrain, singlespeed has too much to compromise. On smooth flats and descends, it is often undergeared that the cyclist has to spin like crazy just for a relatively moderate speed, while on uphill courses, the gear is too high that the cyclist is often forced to push the bike instead. Overall, the added simplicity of singlespeed isn’t worth the compromise. 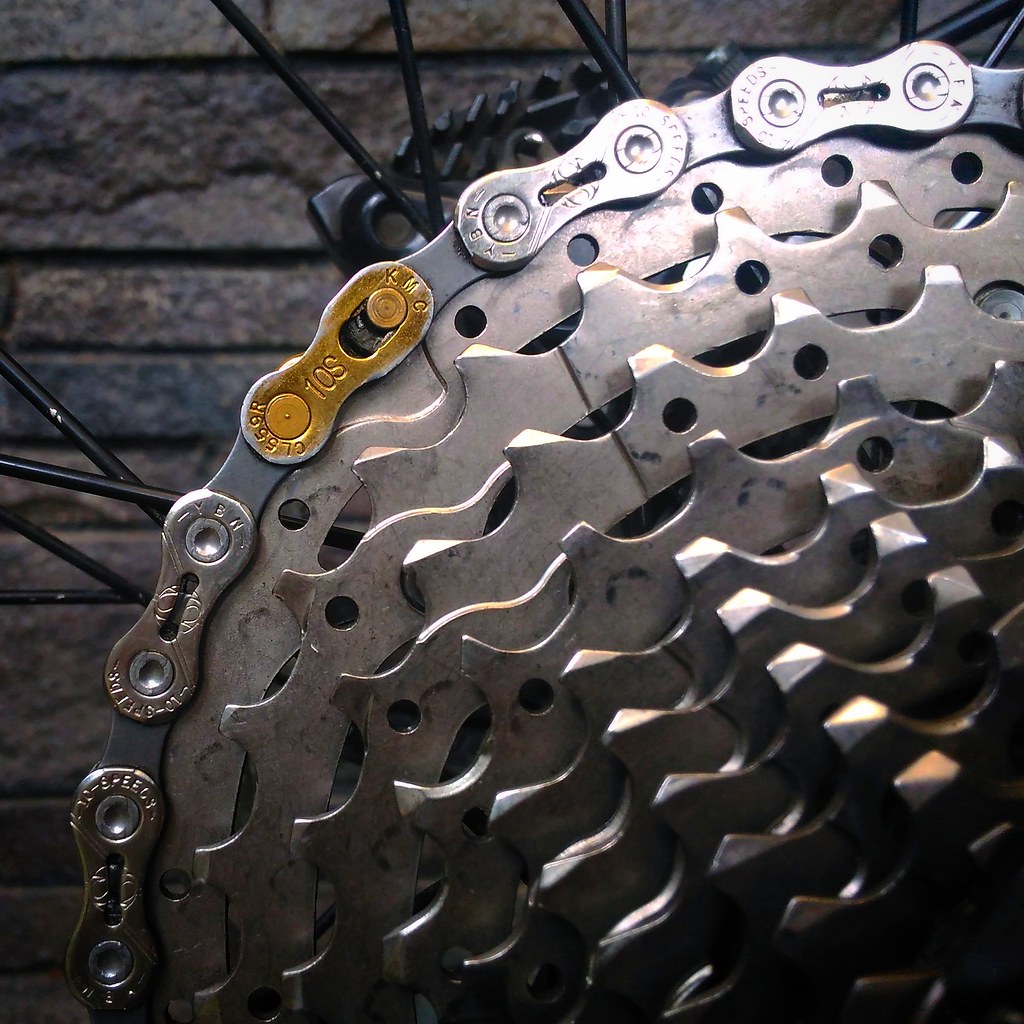 It is logical to minimise the compromise on single-ring setup by using wider ratio gears outback. I stuck with 10 speed however, for another consideration: cost vs benefit.

I had to admit that wide gear ratio IGH (Internal Gear Hub) system like 14-speed Rohloff Hub crossed my mind. It looks sleek and simple, it has wider gear even than traditional 3×10 setup, it is super low-maintenance, and its users swear by them. On the other hand, however, it is a complex piece of machinery, a black box no user can tinker and repair by himself/herself. Should something wrong happened to hub, sending it back to the manufacturer in Germany is the only option available. Not to mention that it costs a fortune, and is much heavier than derailleur counterpart. Therefore, I preferred to deal with the quirks of derailleur system.

1×11 derailleur system is tempting, especially since Shimano has come up with (relatively) affordable 11-speed SLX groupset. Recent maintenance, however, suggested that upgrading to 11 speed outback requires not only high initial investment, but also higher maintenance cost in the long run. The cost for 11-speed chain and cassette sprocket replacement is almost 3x the cost of 10-speed ones (12-speed ones is almost 20x!). Not to mention that 11-speed chain and cassette might be significantly weaker than the 10-speed counterpart. I came to such conclusion after I compared mine with 8-speed system of my buddy’s. His cassette sprocket is still usable even after the chain stretched beyond limit, while 10-speed cassette of mine was toasted even when the chain hasn’t reached its stretch limit. Perhaps it is true that the more speed the derailleur system has, the weaker it is. Perhaps it is another reason why Tom Allen opted for low-tech 8-speed chain and cassette for his world touring bike.

If I had the chance to pick a derailleur system from scratch, I’d probably go for 9-speed one. There is 9-speed Shimano cassette with almost equal range to 10-speed one (12-36t), at significantly lower price. Not to mention the cheaper chain too. Though cheaper still, 8-speed system doesn’t offer the same range and therefore presents more compromise for single ring setup. Recently, however, there are some third-party manufacturer who makes 10-speed cassette with equal range to 11-speed one (11-42t), though the price is equal as well. Perhaps I’ll give it a try when the current 11-36 cassette wears out. 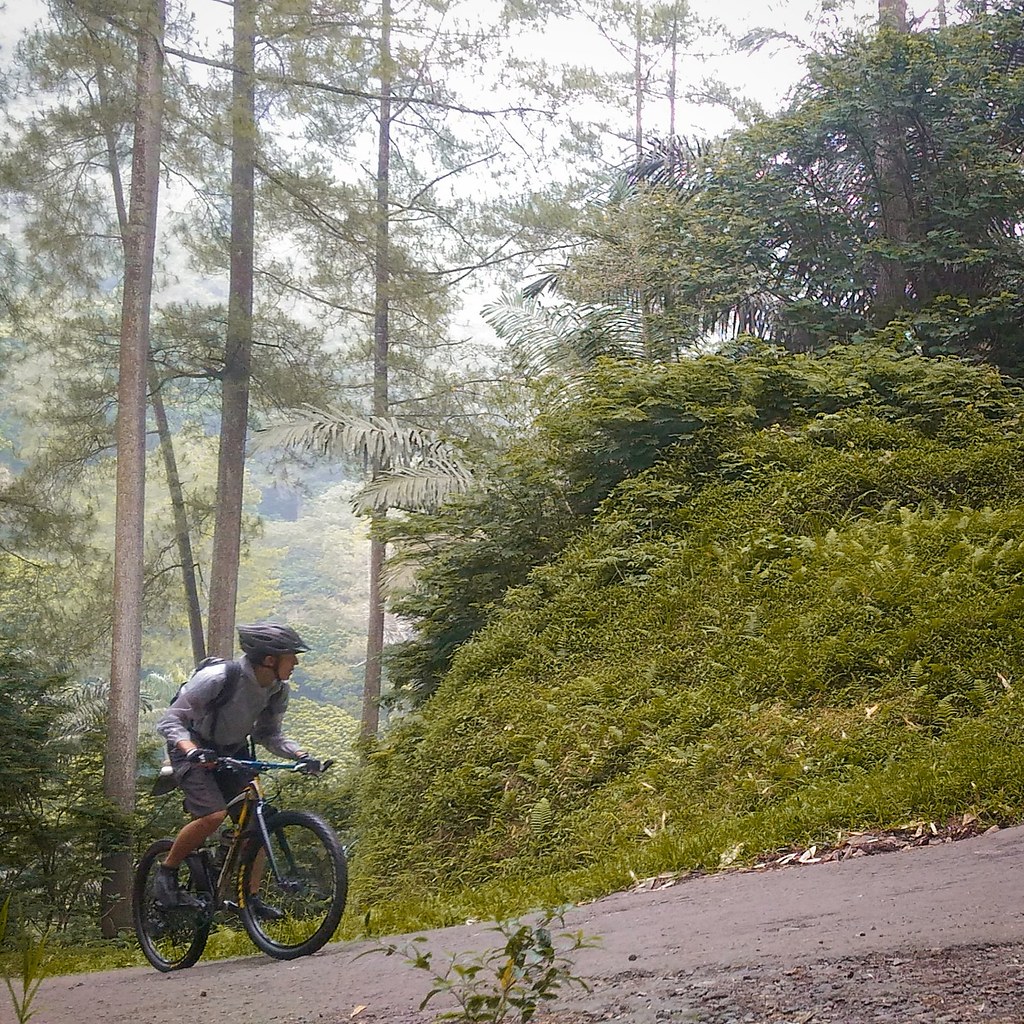 Unlike my take on rigid bike setup, I couldn’t confidently say that single-ring setup (especially 10- and lower- speeds) is suitable for most cyclists. It depends largely on riding style as well as personal power, endurance, and preference. Obviously, it is not for everyone.

The biggest drawback about converting to single-ring setup is decreased gear range. It’s not as compromised as singlespeed setup, but it’s still compromised anyway. In smooth roads, single-ring setup could feel undergeared. Spinning legs doesn’t translate to higher speed, especially on smooth descends. This could be a huge-turndown for those who aim to ride fast. In steep uphill section, single-ring setup could feel inadequate. The cyclist has to rely more on raw power than on the gearing to grind up the hill. This could be a turndown for those who struggled to climb even with granny ring aboard. If one could have the tallest gear and the lowest gear with triple (even dual) chainring setup, why compromise with single one?

Again, the main reason I converted to 1x setup was exactly what my 1x riding buddy told me: simplicity. Single-ring setup means a lighter bike (more to that later), less moving parts, less maintenance, and less to go wrong. It means less thinking and more focus on the ride itself. Does it worth all the compromise? For me, it is. For you, though, you have to decide for yourself.

Do you ride, single-ring or even singlespeed, setup? Why? Do you ride full-geared bike instead? If you’re thinking about converting, what’s stopping you? Make your voice count; share your thoughts below.