Back when I was a newbie and decided to upgrade my drivetrain, another customer in the bike garage laughed at me. Why blew away so much cash for the new shiny drivetrain while keeping the shabby stock tyres? Honestly, I had no clue. I thought that the derailleur would improve the quality of a bike. He told me then, empathetically, that tyres are a lot cheaper, and will improve the ride quality better. It took me months until I swapped to kevlar-beaded aftermarket XC tyres, and I realized, he was spot on.

Today, four years after the conversation on the bike garage, I wholeheartedly believe that the wheel is the most important part of a bicycle. No other parts, no other components, transform the quality of a bike ride like a good wheel setup. Finding the perfect wheel setup, therefore, is paramount to maximum enjoyment of cycling, so much that I believe wheel setup should be the first consideration when building, or even choosing a bicycle.

But where do we start? Wheels have numerous components, from the hub at the center, all the way to the tyres at the outer side. Not all of them, however, have equal contribution to performance. Hubs, spokes, and rims give only so little, while tyre width, wheel size, and tyre pressure give so much. Therefore, it was those three aspect one needs to focus on to find the perfect bicycle wheel setup. Of all three, tyre width should come first, because it dictates the the optimum wheel size and tyre pressure. Thus tyre width becomes the first topic in this series. 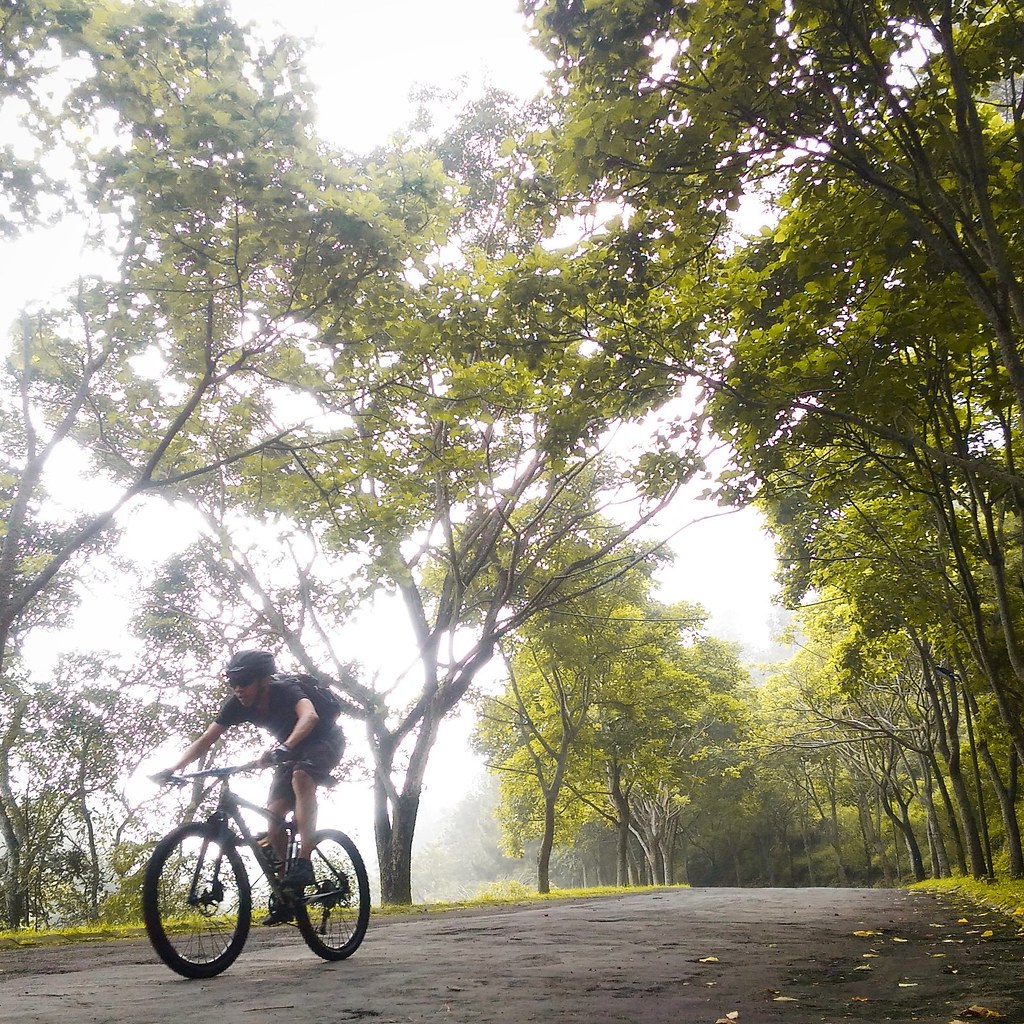 How wide should my bicycle tyre be? Once I pondered such a question and found seemingly conflicting answers. The editors at Bikeradar seemed to rave about mountain bike with beefier tyres, but then again, they were talking about mountain bikes. On the other hand, some people I knew suggested me to switch to lighter, narrower tyres so the bike is easier to pedal on the road. Is there, however, an optimum tyre width that brings the best of both worlds?

In recent years, it was clear that the bicycle industry was going toward the wider direction. This was especially evident in mountainbiking world, where the progression of rougher terrain demanded even wider tyres for added control, grip, and cushioning. Gone are the days when XC bikes sported 1.8 – 1.9 inches tyres; the skinniest now is 2.0 inches, while some even go as wide as 2.35. Manufacturers even began experimenting with plus-sized (2.8 – 3.0 inches) tyres and riders appreciated massive improvement in riding quality. Similar trend was happening in road racing, too. In the past, they opted for super-skinny 18 – 19 mm tyres, while today, most rode 23 – 25 mm ones.

This trend toward wider tyres happens for a good reason: they are faster-rolling and more comfortable.

The comfort part, I guess, makes perfect sense to many people. As the tyre goes wider, the shocks from road surface irregularities are more spread along the width of the tyre. Wider tyre also allows for lower air pressure, which, combined with taller profile, gives more cushioning to the bike than the narrower one and therefore isolates road shocks & vibrations better.

The faster part, however, seemed to defy common sense. Numerous experiments, however, has shown that wider tyre is really faster, because it has lower rolling resistance. All else being equal, the wider tyre tends to roll further and easier compared to the narrower one. Jan Heine, for one, has performed extensive rolldown tests and found that when coasted from the top of a hill, the bike with wider tyre will pick up speed faster than the bike with narrower tyre. Similarly, when tested from the same speed in flat road, the bike with wider tyre will maintain speed longer and roll farther than the bike with narrower tyre. This result has been confirmed by other experiments, even acknowledged by tyre manufacturers like Schwalbe. Though nowhere as rigorous as Jan Heine’s experiment, my own cycling observation came to similar conclusion.

Wider tyre, however, isn’t all bell and whistles. It might be faster-rolling, but there is a good reason why road racing bikes do not use tyres as wide as mountain bikes’. 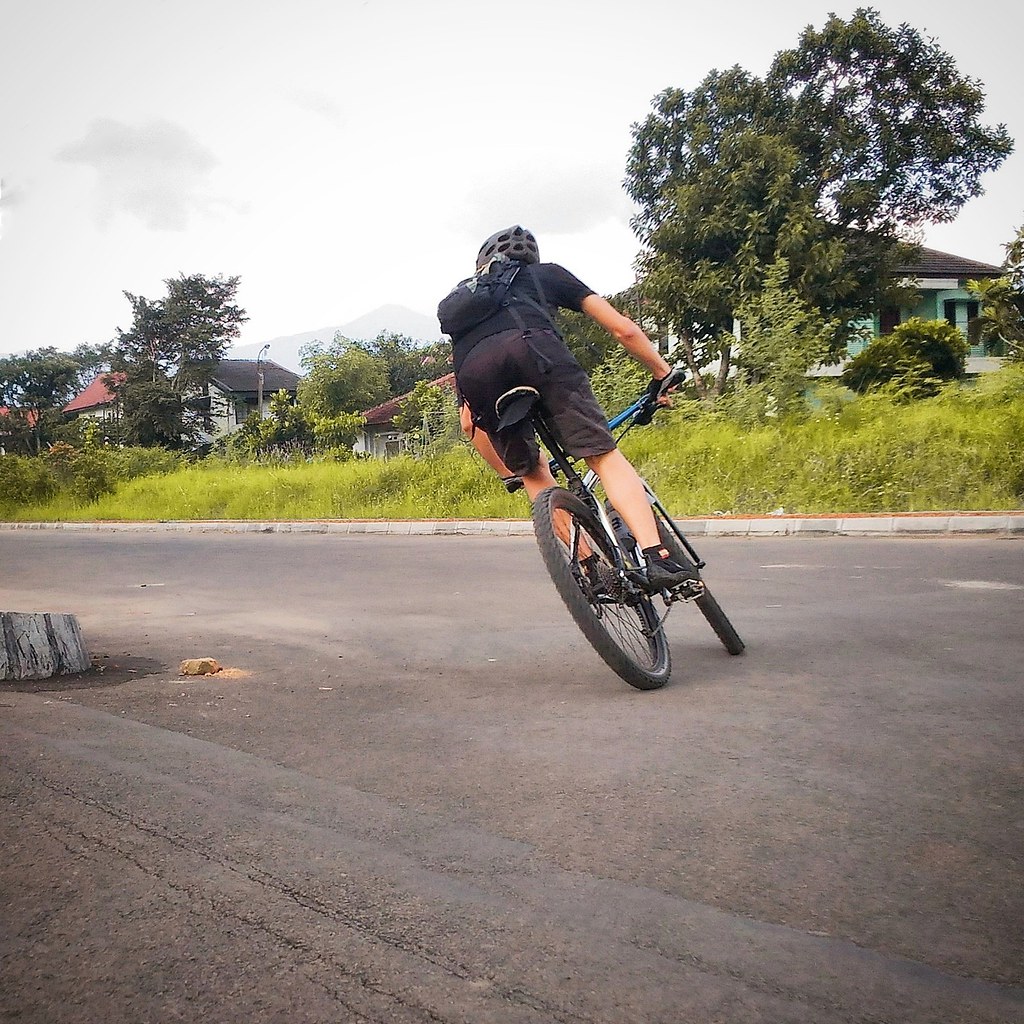 The Downside of Wider Tyres

The biggest drawback to wide tyres is its weight—wider tyres are most often heavier. The excess weight has detrimental effect on acceleration. This effect is negligible for a cyclist who pedals and coasts leisurely at constant speed—the width as well as the excess weight actually help the tyres to maintain momentum and speed longer. On road racing scene, however, acceleration means the difference between a slot in the podium and coming back home being a loser. Road racers constantly sprinting, accelerating, full-gas when exiting corners, taking on opponent in the front, and battling the way to the finish line.

Another drawback to wide tyres is its lower aerodynamics. The wider the tyre, the more it catches wind and creates resistance. The difference of aerodynamics profile between wide tyres and narrow tyres is minuscule compared to the effect of body position (up to whopping 40%!), so it’s mostly negligible to average cyclist. Still, to road racers, every opportunity to lower drag is important, especially since above 30 mph, wind resistance makes up 80% of total drag cyclist has to overcome.

The last, and the least important drawback of wide tyres is look. Some people just dislike bicycles with wonky wide tyres. It is, however, merely personal preference. Personally, I don’t let style dictate my joy of riding; style should come second, after functionality. But then again, that’s just me. 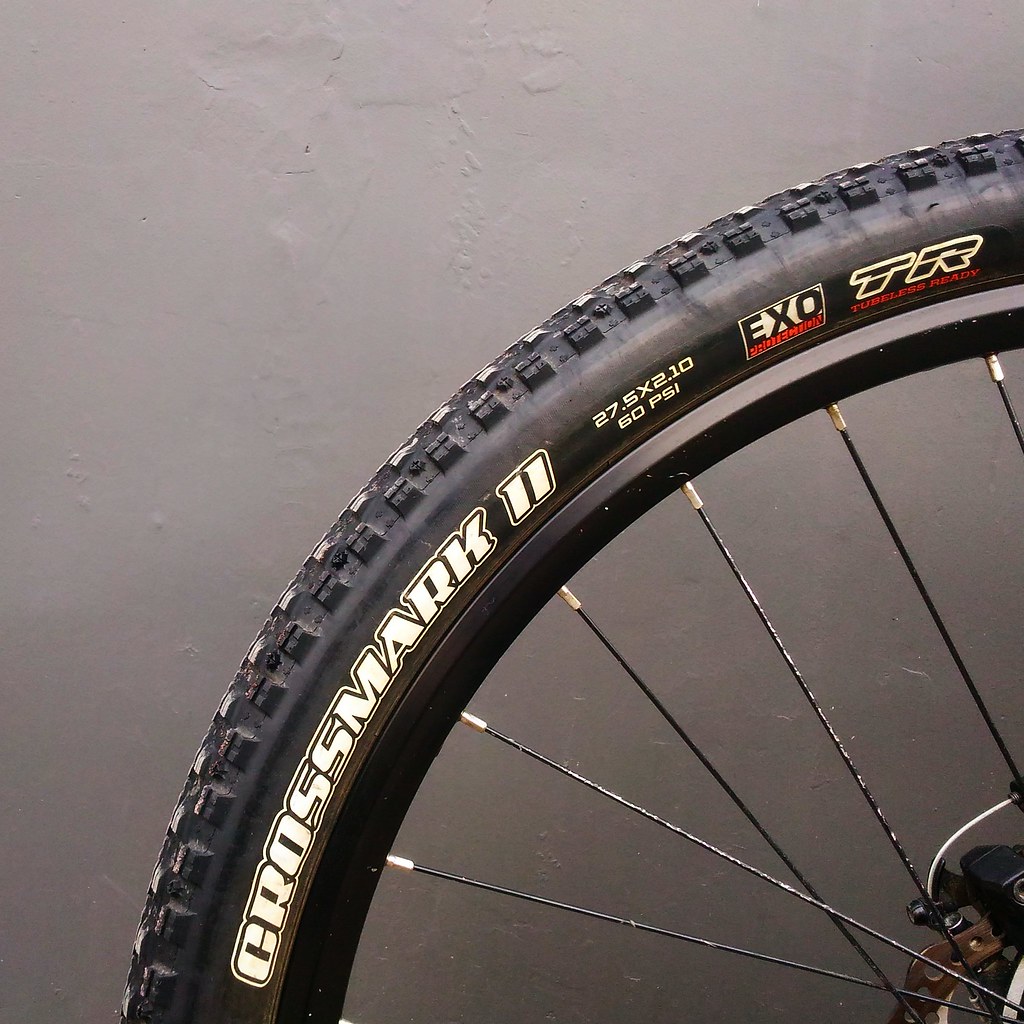 So we’re back to the last question. Since both wide tyres and narrow tyres have their own strength and shortcoming, is it possible to determine the optimum tyre width, the nice middle ground between the skinniest and the fattest? I believe it is. Keep in mind, though, that optimum tyre doesn’t truly mean the best of both worlds; in the other hand, it also means a compromised version of either end of spectrum.

Taking into account the widest and the narrowest bicycle tyres, I concluded that the nicest, most-balanced bicycle tyre width is 2.1 inches. It is the perfect middle-ground for those who ride mixed-terrain, on-road and off-road equally, with optimum balance between speed, acceleration, and comfort. Coincidentally, it is also the standard tyre width for XC bikes, which sits almost in the middle position between full downhill bikes (the ultimate mountain bike) and road bikes.

Those who rides mostly on tarmac might opt for something narrower, like 32 mm. It is way skinnier than the 2.1 suggested above, but wider compared to standard 23 – 25 mm road racing tyres, providing enough comfort for general road riding at the slight expense of acceleration.

On the other hand, those who ride mostly offroad might be better served with even wider tyres—my calculation suggested the width of 2.8 inches. Surprisingly, it is exactly the width of plus-sized tyres, which is currently gaining momentum in mountain biking world. The plus tyre provides even taller float, which, combined with lower pressure, silences trail chatter and allows the rider to flow faster and smoother.

Personally, though, I use 2.25 inches mountain bike tyres. They’re slightly wider than the balanced 2.1 inches, but I chose them deliberately to compensate the effect of smaller wheel size, which I will discuss later, in the next installment of this series. 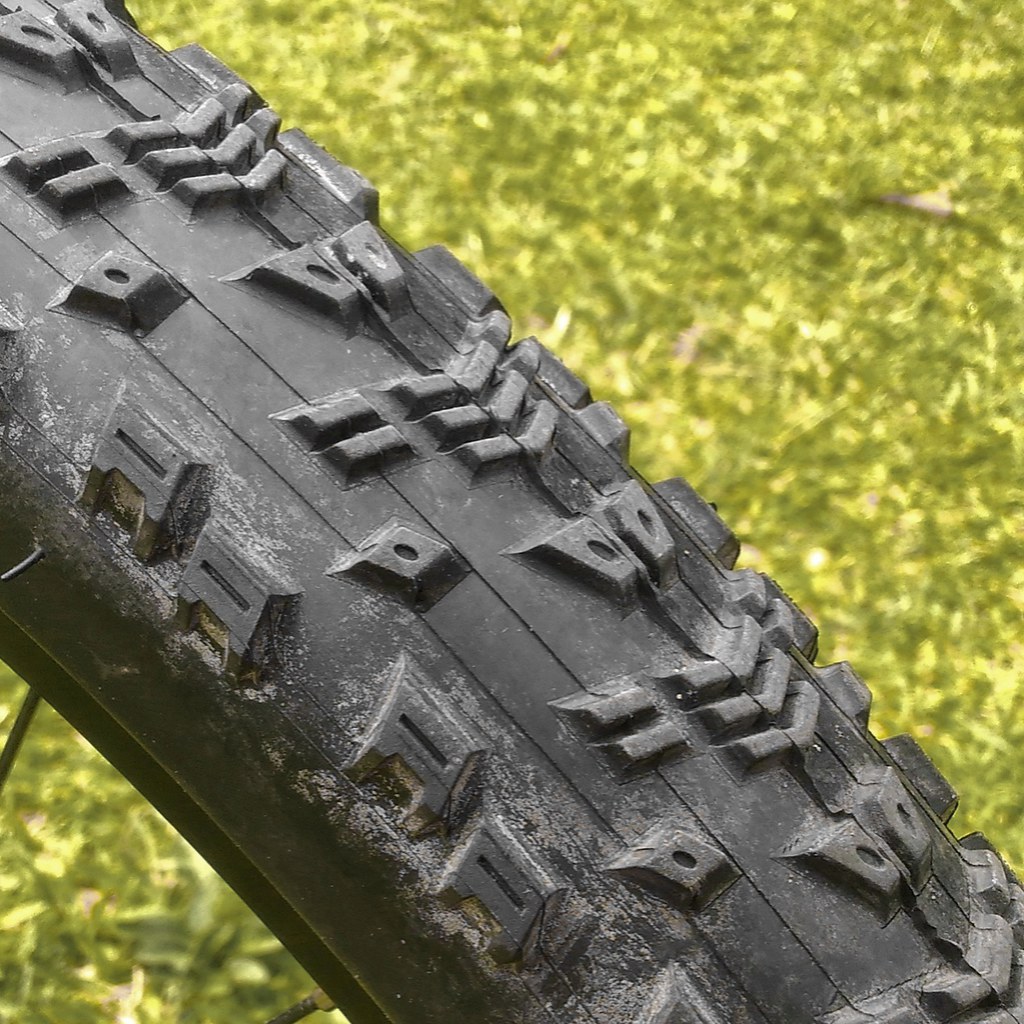 Clearly, tyre width is just one equation of the perfect tyre wheel. Apart from wheel size and tyre pressure, which I will discuss later, there are other things that affect bicycle tyre’s performance: tread pattern and casing suppleness.

Casing suppleness, on the other hand, is simpler to understand. The more supple the casing of a tyre, the lighter, faster, and more comfortable the tyre, at the expense of durability. This is usually signified with higher count of TPI (thread per inches). The harder the casing, on the other hand, makes the tyre more durable and lasts longer, at the expense of speed, acceleration, and comfort.

With available models on the market, I concluded that the most-balanced tyre in term of tread pattern and casing suppleness is kevlar-beaded XC tyres. It often features shallow, fast-rolling tread pattern that rolls fine and has adequate grip in various road surface. It also features balanced casing suppleness—it’s not as paper thin as cotton-casing road tyres, and is ready to take the brunt of offroad beatings, but it’s not as hard as downhill or touring-specific tyres so it rolls better, accelerates better, and is more comfortable. The kevlar bead creates a lighter and more supple tyre than the wire-beaded ones, at the expense of slightly higher cost.

How wide is your bicycle’s tyre? Do you like it, or do you plan to switch to wider tyre, or to narrower tyre instead? Why? Make your voice count; share your thoughts below.