Standing 1,818 m above sea level, Manglayang is the least famous among Bandung’s northern mountains. Not only being the only one left out of the infamous Sangkuriang legend, it is also the least studied. Not much is known about the mountain, except the fact that it is an ancient stratovolcano, with unknown last eruption—perhaps a couple of millions of years ago, preceding the oldest human civilization that created the legend—that its crater is no longer visible, buried under the lush green forest.

Originally planned as a full day trip, the Manglayang cycling adventure ended up being parted into two-days trip. There were several reasons that made the duration of the trip longer than planned, including unclear maps & directions as well as unanticipated length of hilly, offroad trail that bogged us down. Thus I decided to make the trip, as well as the report, in two parts. Part 1 covered the exploration of west, north, east, and southeast of Mount Manglayang, while Part 2 covered the southeast, south, and southwest of the mountain. 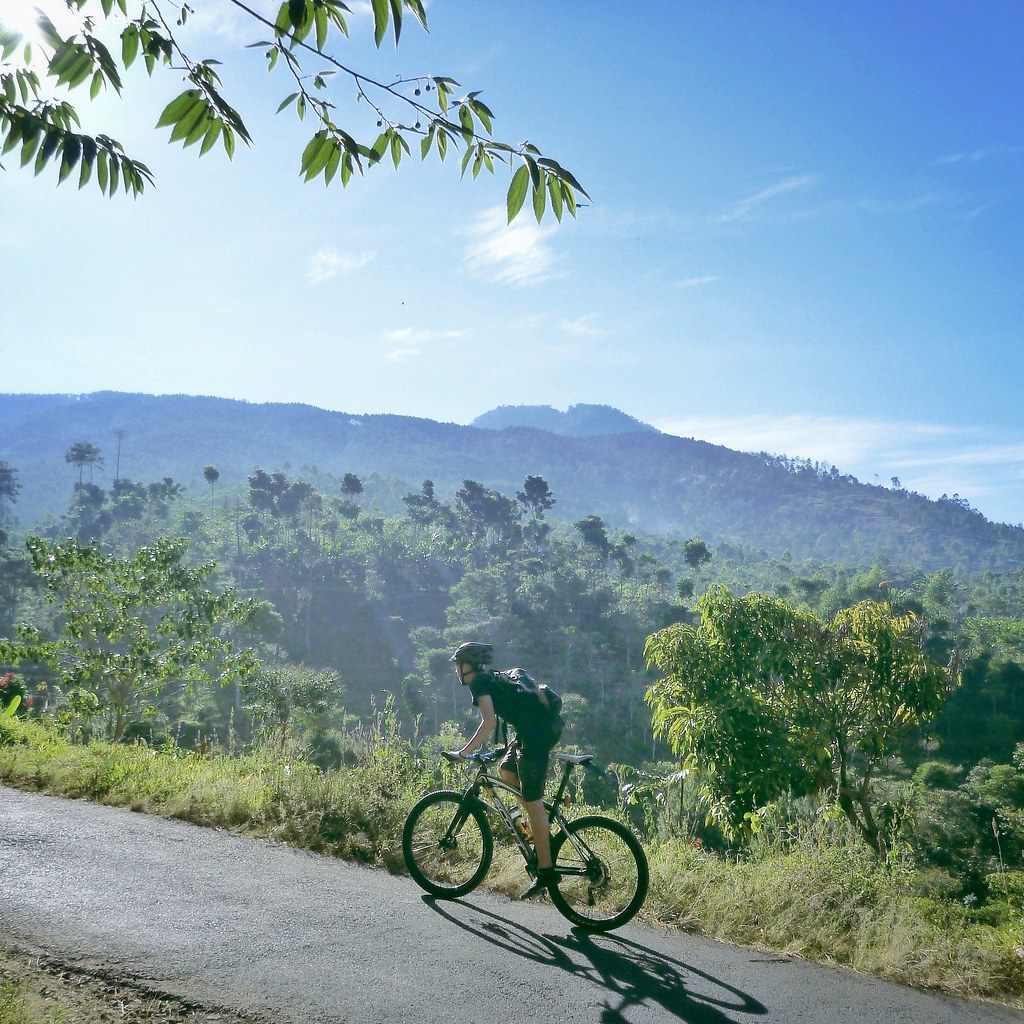 The adventure trip to Manglayang started as a climbing grind to the north through Palintang Road—the very same road that we took on our Lembang Fault’s north side cycling exploration. The peak of the mountain could be seen on the east side of the long uphill road, popping from behind its own lesser hill, thanks to the clear sky and the low humidity of mid-dry season.

After a short break in Palintang Peak, we took a turn to an offroad double track to the east. It was a hilly, gently-climbing trail through cinchona plantation, which was refreshing despite the harder-to-pedal rocky surface, thanks to the fresh air from the mountains. Eventually, the track led us to a checkpoint called “Carpet” by mountainbiking fellows, which was a loading/unloading spot for local farmers.

From “Carpet”, we rolled down the dusty, mellow singletrack through local vegetable farms in Manglayang’s northern slope. It was unavailable on Google Maps and riddled with intersections. Luckily, direction from a local farmer we met along the way, as well as my own fuzzy memory, helped us choosing the right path, despite occasional errors along the way.

At certain point, we had to stop and carry our bike down a steep, slippery, narrow footpath to the bottom of a valley, where we had to cross a small stream and climb another footpath up the hill. It was troublesome, indeed, but it was the only way we could get to the network of trails in Manglayang’s northeastern slope.

What followed after all the hassles of carrying the bike was a smooth, flowy singletrack under the pines. It was hard and dry, allowing our low-profile tyres to find grip easily, so we could flow along the trail without much effort. Speeding along the trail, accompanied by fresh gentle breeze and the sound of rustling branches, was such a wonderful experience—even Bowo, my riding company, said that it was the best trail he had ever ridden, and I agreed with him. 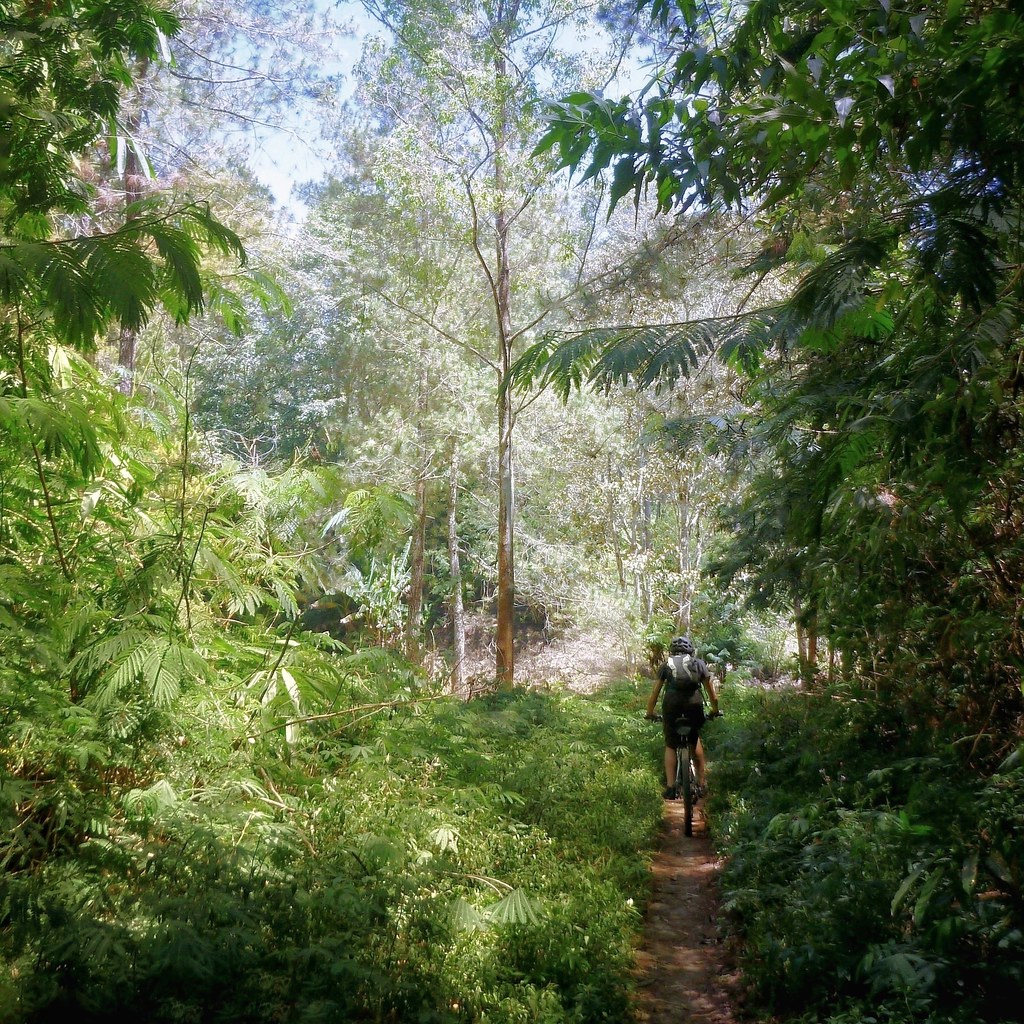 The joy was short-lived, however. In just after a kilometer, we faced another intersection. Unlike before, there was no one around to ask for direction. I couldn’t load the map I had prepared for the trip, thanks to lousy internet connection in the woods. After minutes of futile attempt, we decided to rely on my blurred memory and followed the trail available on Google Maps once we found one. The majority of the trail was made of rocky tracks. At times it was singletrack-narrow, at others it was double-track wide; sometimes it was hidden under the shades of trees, sometimes other it stretched on top of sun-scorched mountainridge. Nevertheless, the long rough trail constantly shaked my body and rattled my bone—in fact it was the first time I felt the helmet and the glasses I wore became a burden to my head. After all, though lacking in steep downhill sections, the trail was branded as an all-mountain route. I had to admit that I wished I was riding a full-sussed mountain sled instead of a fully-rigid steed.

There was actually another supposedly-beautiful section of trail along the way. In reality, however, it was full of monorails, the scar damage caused by dirtbikes wheels digging into the ground like chainsaw digging into tree trunk. We were lucky that it was dry when we rode through, or else it would’ve been nasty mud feast. Still, we wished it was undamaged; the monorails forced us to slow down most of the time, even to stop frequently, just to cross unrideable sections.

Eventually, the trail led us to Cipacet camping ground, another checkpoint located next to a small river in the middle of the woods. There was a wooden bridge 50 m upstream, but crossing the shallow stream on our bike head-on and soaking our feet on fresh mountain water felt better, especially after being constantly beaten by rocky trails and bright scorching sun along the way. The pristine stream, flowing from the springs of Mount Pangparang and Mount Jambu on the north of Mount Manglayang, made the ground a perfect camping spot for bikepacking. Even better, it was also rarely visited by tourists, thanks to hard offroad access. We didn’t camp there, however; after all, we had planned the ride as a one-day trip. 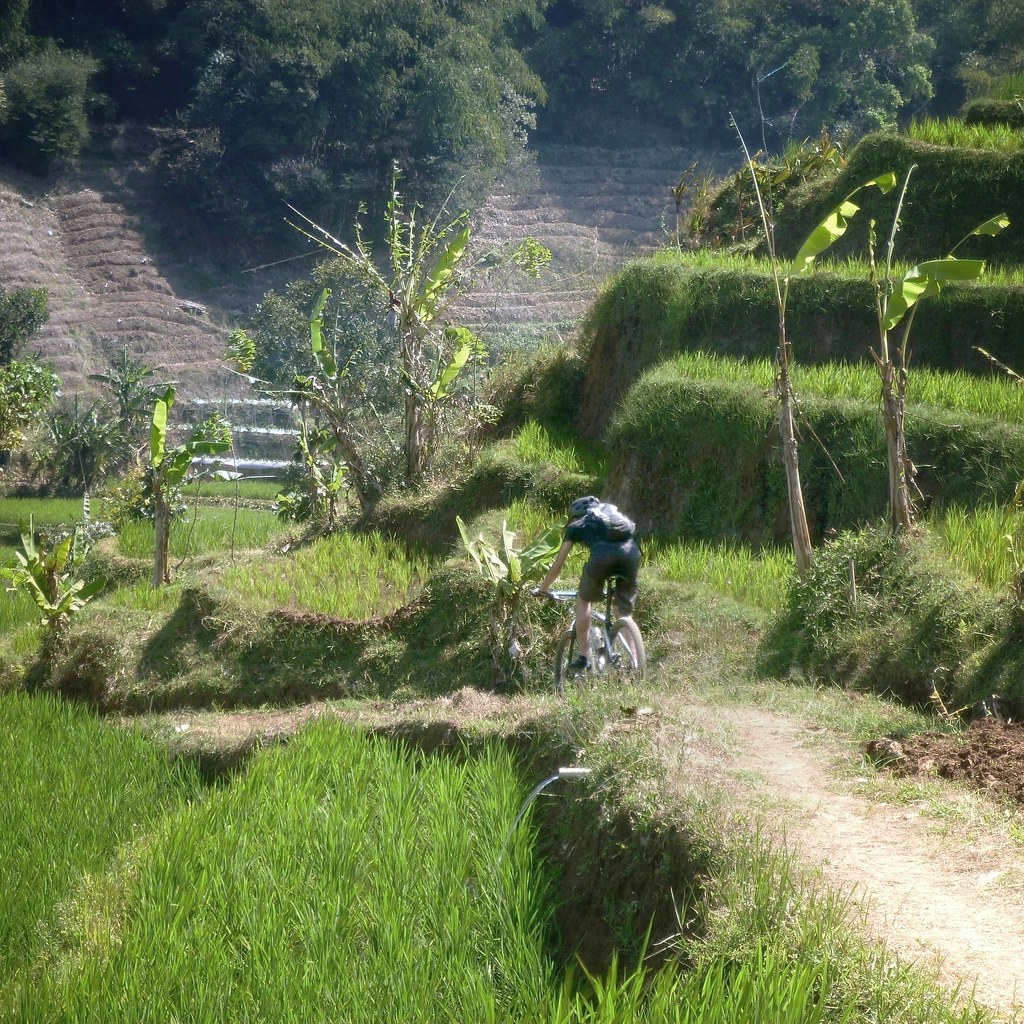 A rocky climb awaited us after the short break in Cipacet. Combined with the heat from the mid-day sun, it sapped our newly-recharged power from our lungs and legs. Eventually we reached a rural road, only to turn back westward just after 20 m, into another offroad trail through terraces of ricefield. The view was beautiful, but the hilly terrain, the stinging sun, and the fact that we had been battered on previous trail, made the ride physically challenging. The trail led to another rural road, which hilly terrain made the downhill trip to Kiara Payung, our next destination, harder than expected.

Eventually we reached Kiara Payung, a well-known camping ground on the southeast slope of Mount Manglayang. It didn’t have the abundant stream of clean water and the outdoor stillness of Cipacet; it however, had more modern facilities, including a group of warung frequently visited by locals and visitors. A late lunch, consisted of a package of timbel rice and a glass of sweet iced tea, in a warung there was the kind of replenishment we needed after all the pedalling sessions from the city.

From Kiara Payung, we were supposed to continue our journey to Batu Kuda, to the west. The day, however, had already descended to late afternoon. Considering the fact that we still had several destinations to visit, we decided to cut our trip there and continue our exploration trip another day. Thus, from there, we rolled downhill to the main road at the south to get back home. 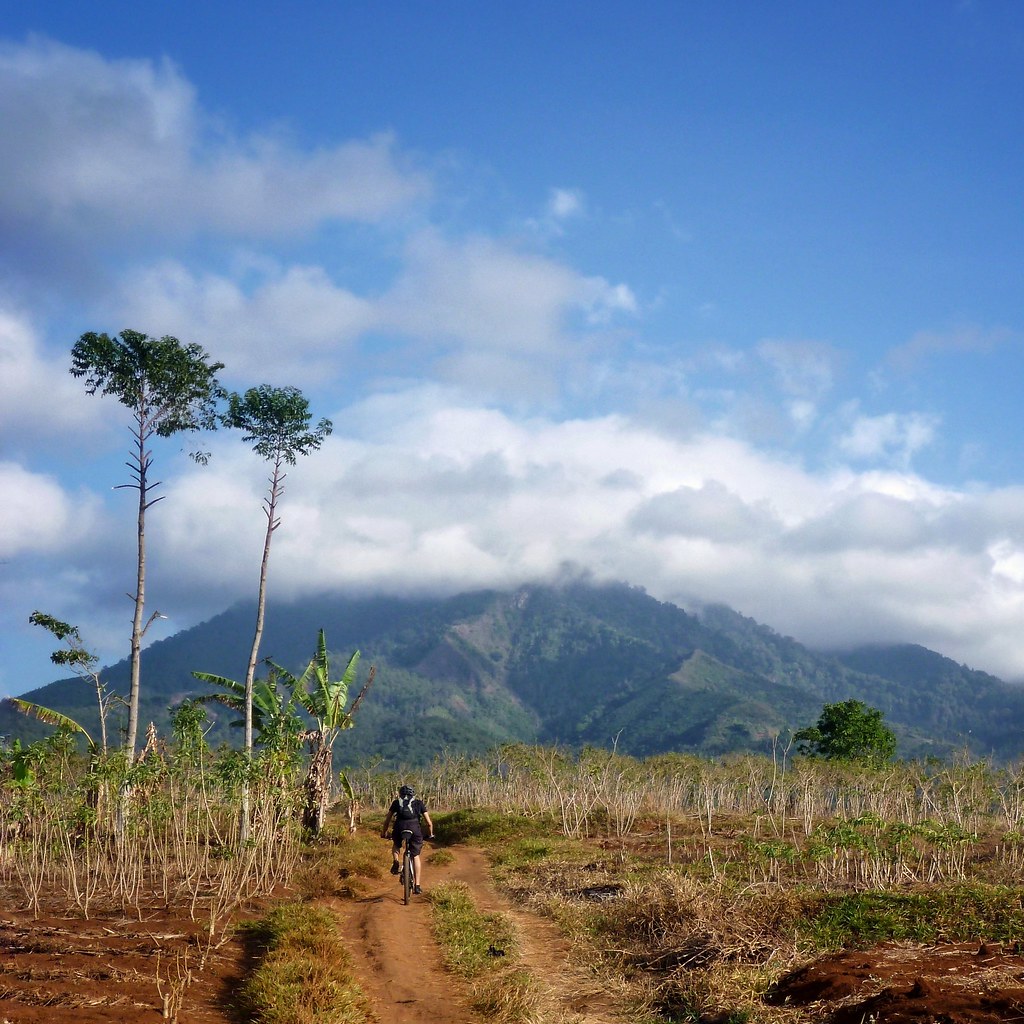 The part 2 of the trip began with the climb back to Kiara Payung, the point we left off in part 1. My riding buddy Bowo suggested we take a small road at the back of Unpad instead of the usual route to get there, which I didn’t consider seriously at first, but was truly thankful for, later; the road, especially the trail across local farms, offered such a magnificent open view of Manglayang and its surrounding area, that we had a hard time believing such a place existed near the city. Accompanied by fresh gentle breeze and the morning sun’s warmth, riding the gently-climbing trail all the way to Kiara Payung was blissful.

After buying water supplies in Kiara Payung, we continued our trip to Batu Kuda. The ride began with steep hilly footpath, followed by mellow trail and rural road. After a certain point, however, the road turned steep uphill, even became a rocky rough climb for the last 100 m, which quickly drained power from our legs. Situated at 1,200 m above sea level on southern slope, Batu Kuda is the most well-known camping ground around Manglayang, especially for its cozy carpet-like grass field under the shade of pine trees. It is also known as one of the starting point to hike to Manglayang’s summit. The name, literally means “Horse Stone”, was derived from a massive, horsehead-shaped volcanic stone to the north of the camping ground. According to local folklore, the stone was the head of Sembrani, a flying horse, who fell from the sky and got stuck in the mud, until it turned to stone overtime. We didn’t find any mud around, though, let alone the one that could trap a gigantic horse; we found instead countless smaller similar rocks littered the area, probably sprawled from the crater by one of Manglayang’s ancient eruptions. 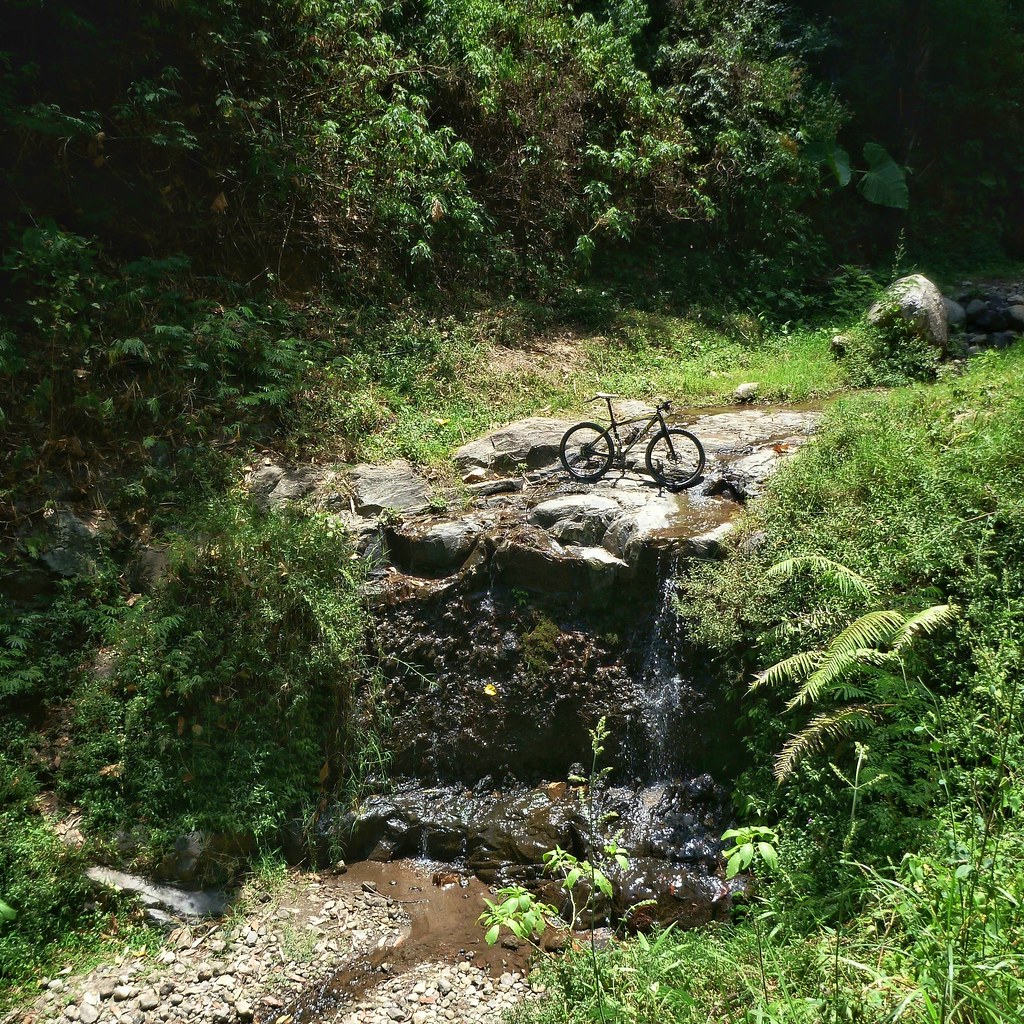 From Batu Kuda, we took a singletrack through the pines to the west, which soon turned to open trail along the mountain’s contour, showing the clear view of the city to the south. It was followed by mellow descending rural road, before turning to another power-sapping uphill climb northward, all the way to our next destination, a small waterfall on the southwestern slope of the mountain. Called Curug Cilengkrang, the 3 m waterfall was almost dry, exposing old igneous rocks underneath, the remnant of Manglayang’s lava flow in the distant past. Local officials said it was drier than it was supposed to be—even in dry season—presumably due to damage to the forest in its water spring area, a bad news for the conservation effort.

From Curug Cilengkrang, we pedaled through mellow rural road further to the west. Our final destination was Lamping Café at the southwestern slope of Mount Manglayang. Originally planning to buy myself a cup of local coffee and a decent lunch, I ended up buying myself just a glass of iced mango juice, which was a perfect treat after half a day’s ride through hilly terrain under dry season’s blazing sun. It was only after we finished our drinks and laid down a little while, we coasted down to the main road in the city and went back home. 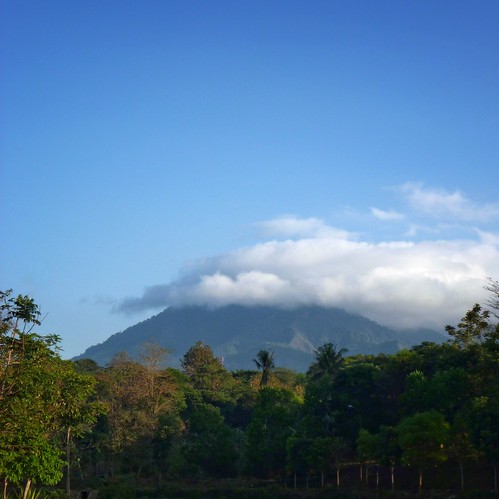 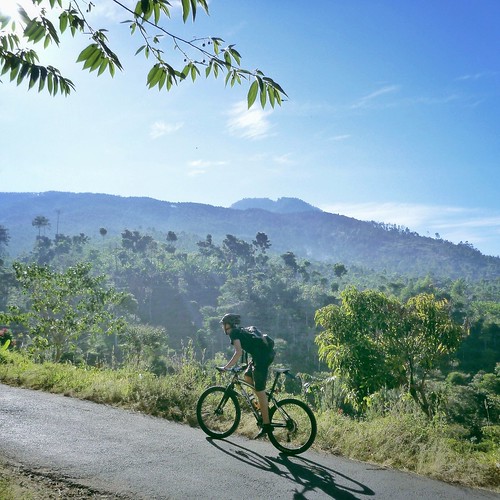 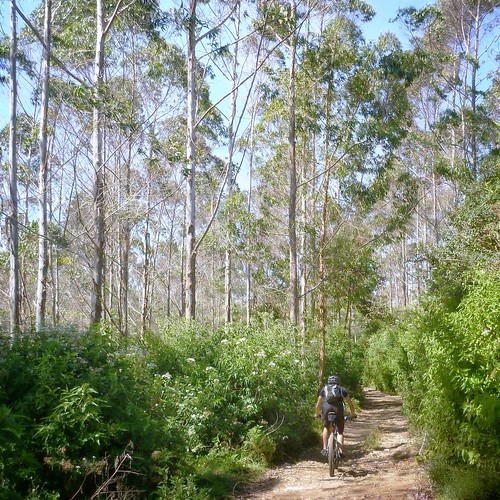 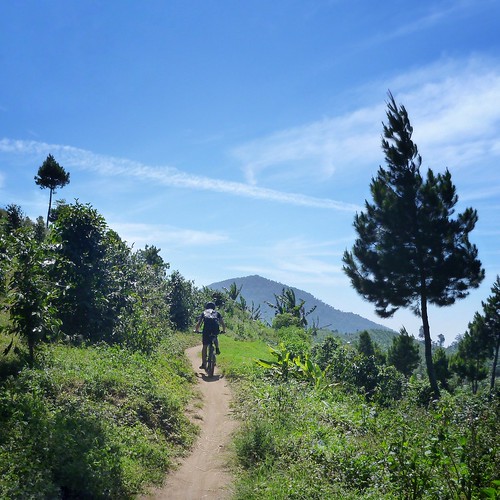 The singletrack through local farms past Carpet 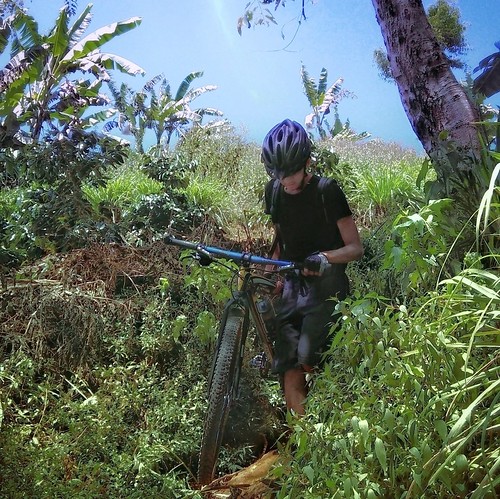 Bikehiking a footpath down to a valley 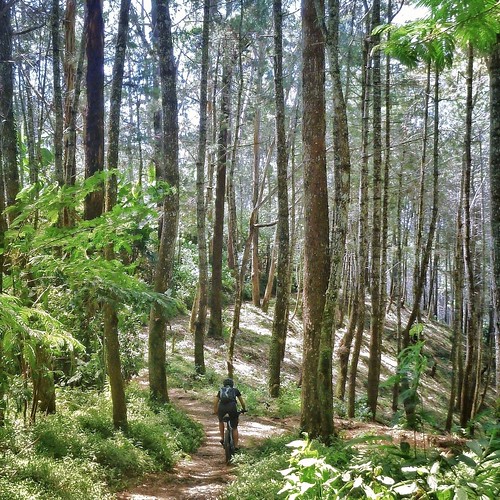 Flowy singletrack under the pines 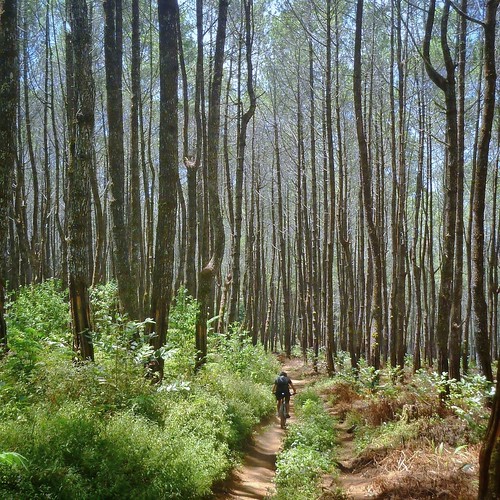 Smooth singletrack under the pines 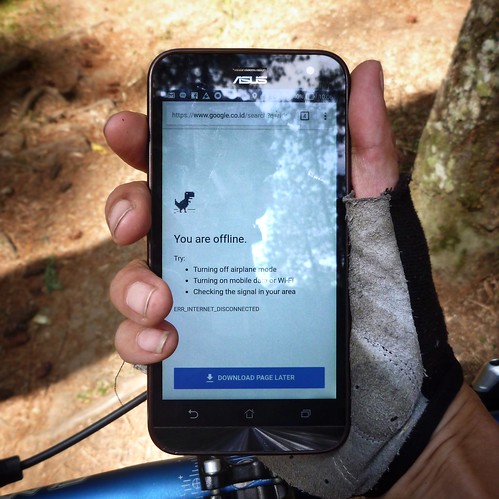 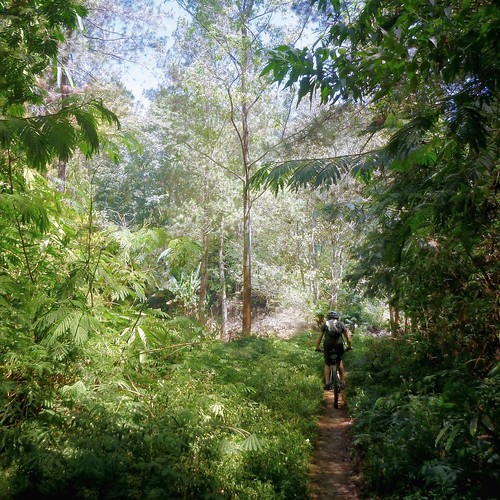 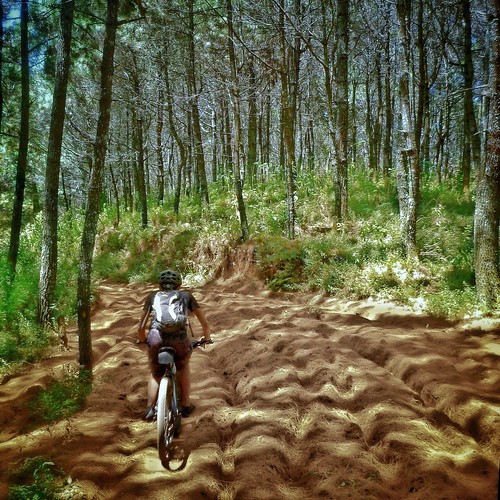 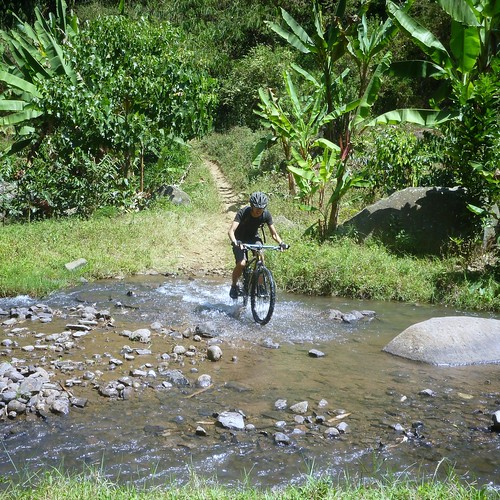 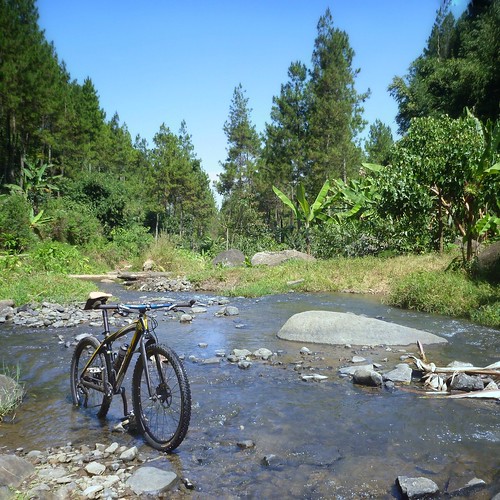 Relaxing by the riverside @ Cipacet 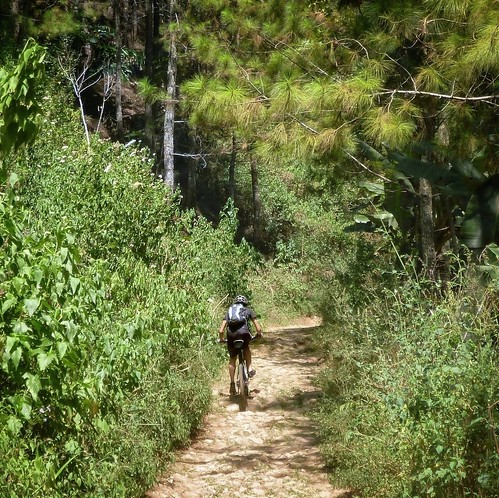 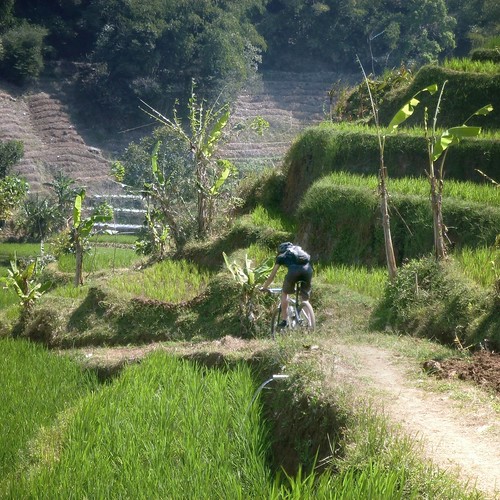 The trail through terraces of ricefields 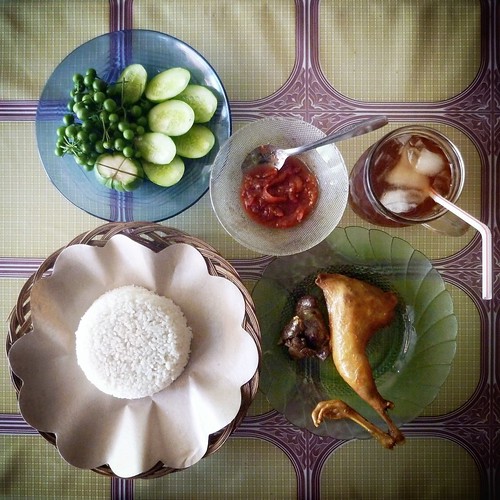 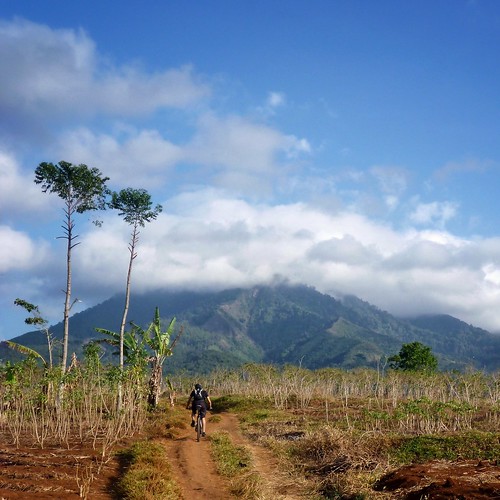 View of Manglayang from Unpad backroad 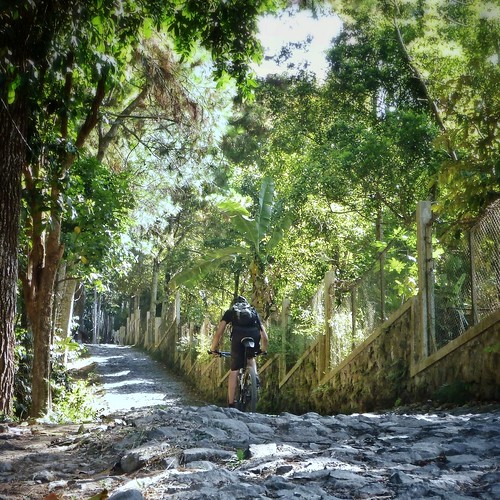 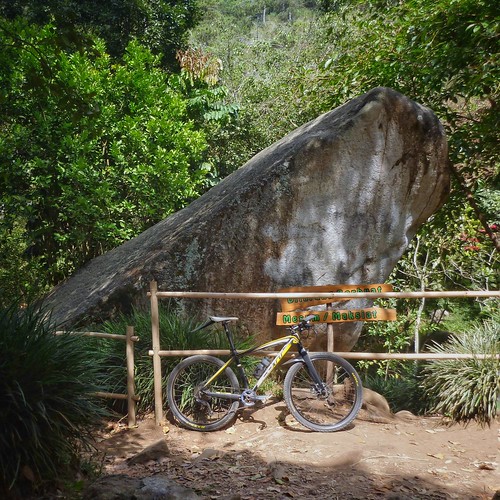 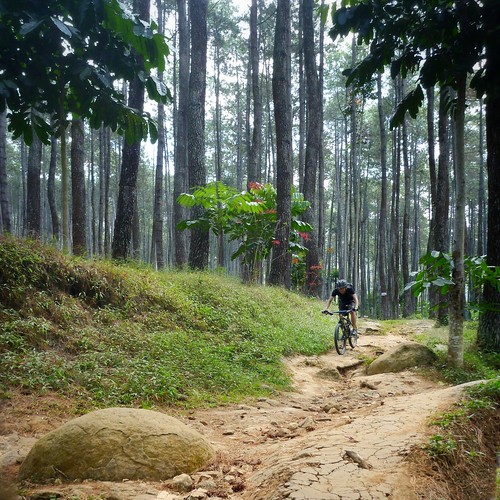 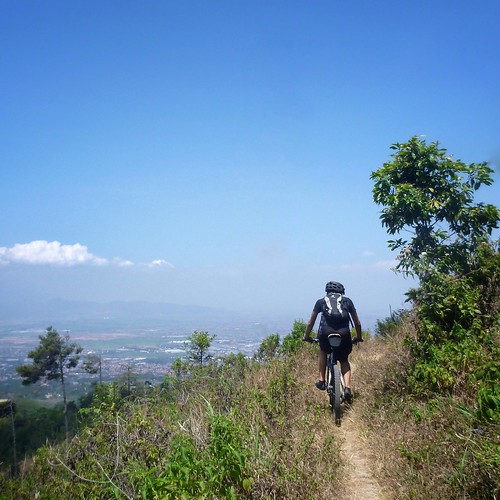 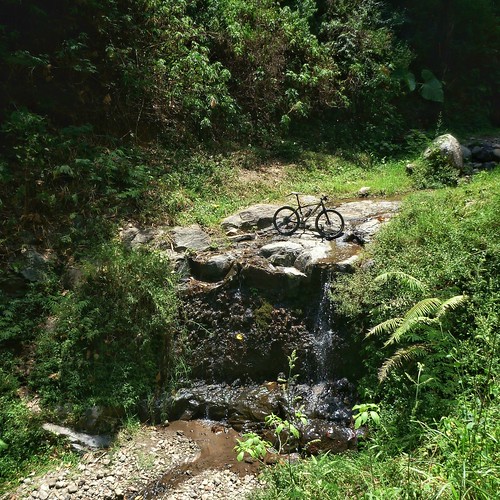 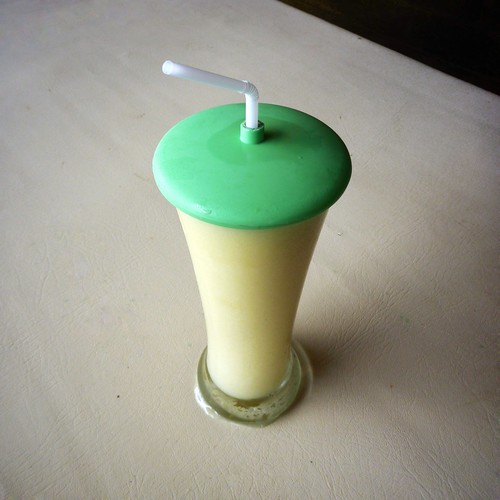