“It is, indeed, beautiful.” My riding buddy Ryan remarked.

We were just around 500 m away from Rancabali main road, rolling at relaxed pace, and already the lonely road served us with the moody view of hilly tea plantation under cloudy, silvery sky. It was thirty minutes to midday, but the cool high-altitude breeze was refreshing.

Truth be told, he had almost missed the ride entirely.

Just five hours before, he told me he had flat tire and would be a bit late. He suggested me to ride ahead; he’d catch up, and we’d meet in Soreang, instead of Miko Mall as we had planned earlier. When I reached Soreang half an hour later, he informed me he got second puncture, and apologized that he had to bail out. “So… looks like another solo ride,” I told myself, as I continued the ride and began tackling the lengthy Rancabali Pass climb, comfortably, patiently.

Imagine my surprise when I took a break at Kawah Putih Entrance Gate two hours later, I got a new message from him: he was catching up!

The sky was bright blue, and the warm golden sunshine swept across the plains—such a perfect weather. Not wanting to miss anything, I shared my live location and continued the ride, further down to the southwest. I took it slow when the route turned to gravel road. Just like my first Rancabali exploring ride, though, the weather flipped almost in an instant—giving the plains the moody look I always adored. When the route brought me back to the lonely pavement road, I couldn’t help feeling it would be a waste to enjoy the route’s beauty alone. By then, Ryan was only an hour away; I told him I’d meet him in nearest main road turn, so we could ride the rest of the route together.

And thus, I waited. 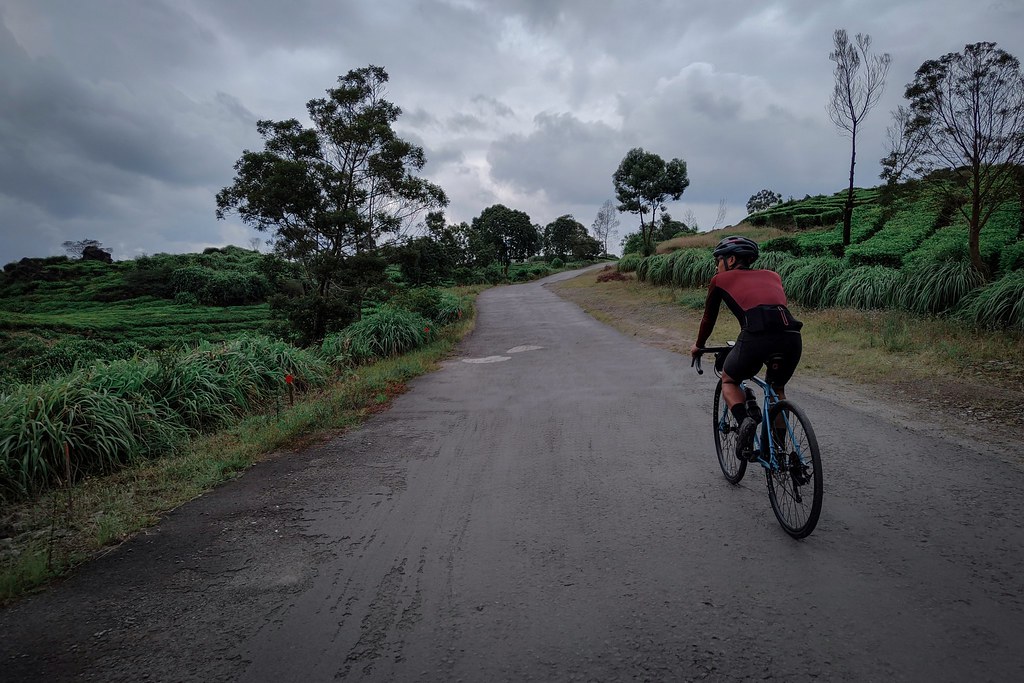 “If only I had no punctures, we’d be here two hours earlier,” Ryan commented.

We continued our ride after a quick brunch on a roadside warung. Thanks to the weather, I wasn’t concerned with time; the silver clouds cast consistent gentle lighting despite the hours. We rolled at relaxed pace, enjoying the view and the breeze; we even left our pre-planned route just to look around. Our only (slight) regret was the fact that no other cyclist fellow joined us that day.

Ryan seemed apprehensive when we eventually returned to our pre-planned route, which took us to a dirt road across the plantation. I could understand: not only he was riding 32 mm slick tires that day, he also already had two punctures earlier in the morning! As we rode further along the gently-climbing trail, however, I could see his concern turned to joy—even more so, when, after a viewpoint to vast landscape to the west, the trail began descending. He had regained so much confidence that, when we reached another main road, and I asked him if we should call it a day, he firmly chose to continue the ride—despite knowing it’d involve rocky gravel road ahead.

The second part of the ride followed the northwest-bound route of Graventuria’s March of 2022 event—the event that inspired me to explore the Rancabali region. Even though it was too rough to rail at high speed with rigid bike, the descending gravel road was fun and awe-inspiring, just like I had always remembered. Instead of riding all the way to Kampung Stamplat Girang, however, we made a turn toward rough macadam road to the west, toward Sinumbra tea factory.

Just when we reached smoother road, Ryan remarked that his rear tire felt soft. I touched it; the squishy sensation brought back the memory of me, being stranded in the darkness of night, under the rain, alone.

Ryan had just had his third puncture that day. 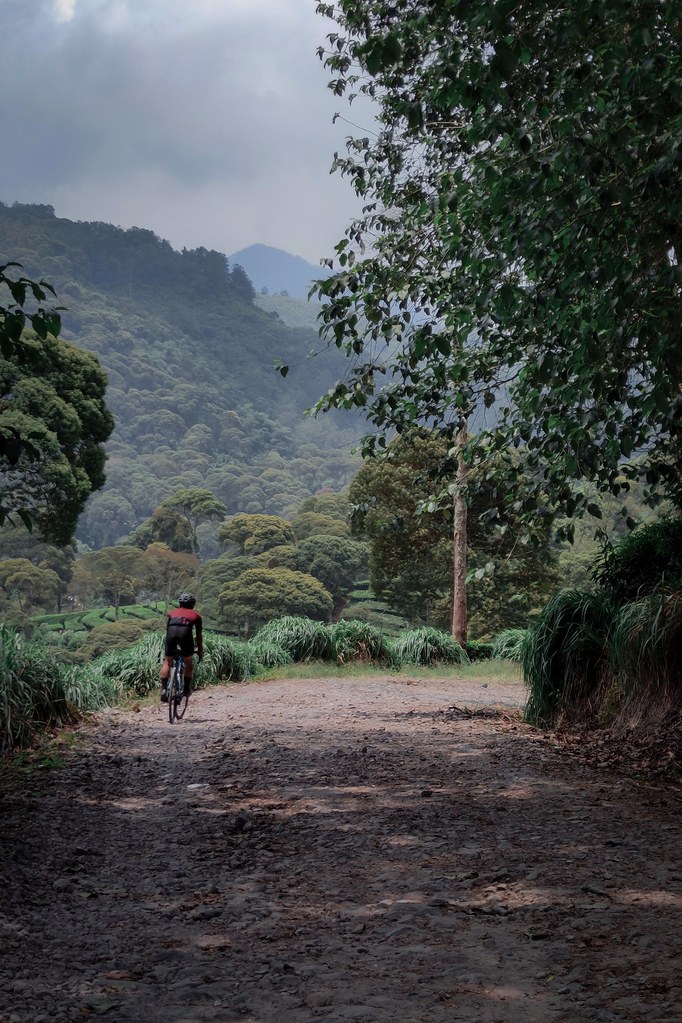 So, is my second route of Rancabali Outback worth a ride?

Unlike the first, this time I could confidently say it is. The route generally has better view and better rideability, while providing more diverse road surface/type. It has overall less climbing too.

Still, with 130 km of distance and almost 1,900 m of total elevation gain, it is still no cakewalk. In fact, I suspected it was the distance and the total climbing that made other fellow cyclists declined our invitation to join the ride.

There was certainly another factor that made this particular ride more enjoyable: having a ride partner. Unlike Pangalengan region, Rancabali backroads are often too lonely, that riding it solo gave me a fleeting sense of dread. With a partner, I can be rest assured that we can help each other if something unwanted happens. When a loose dog chased us, we still had that adrenaline rush, but we could still ride away laughing (nervously). When Ryan’s tire punctured for the third time in the middle of nowhere, we could handle it with laughs and jokes; I know for sure it would’ve resulted in self-pity, had it happened to me while riding alone.

As we were climbing back to Kawah Putih Entrance Gate on our way back home, we were already thinking about going back. I am definitely coming back; after all, I still had another route I plan to explore in the region. Let’s hope it’ll be at least as awe-inspiring—the kind of route that leaves lasting fulfilling impression, despite the toughness. 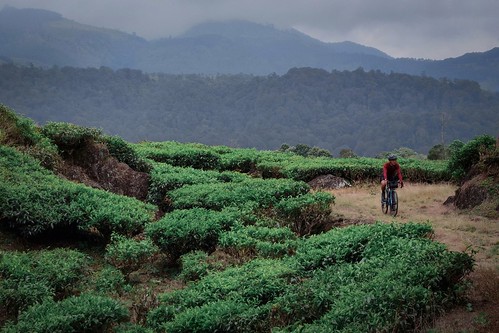 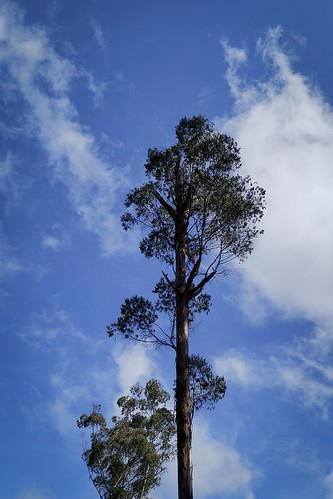 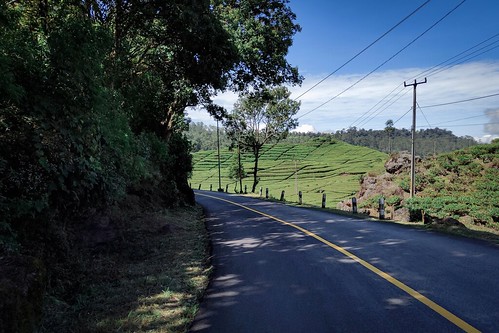 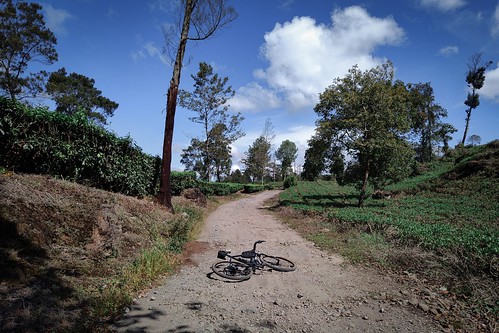 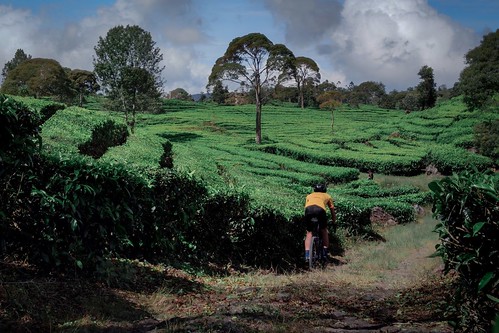 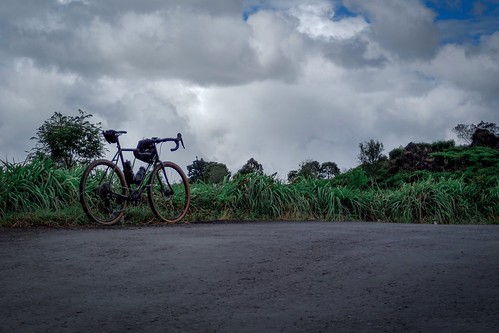 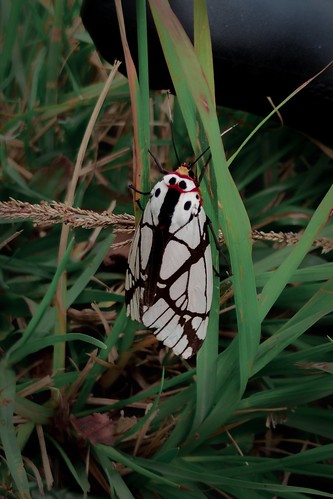 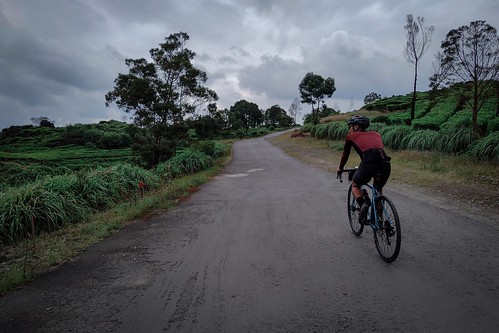 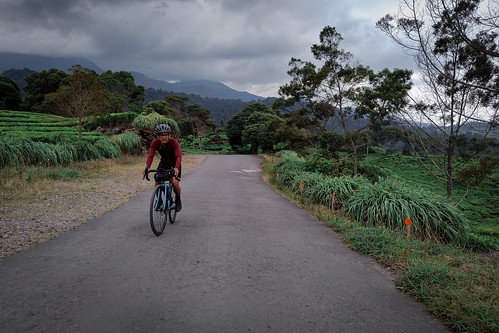 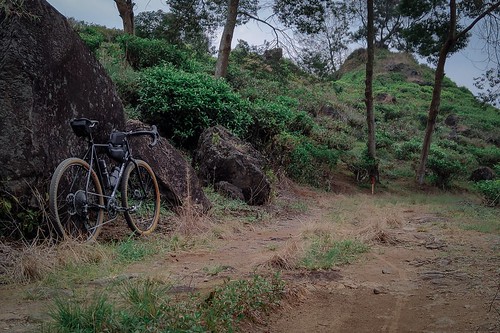 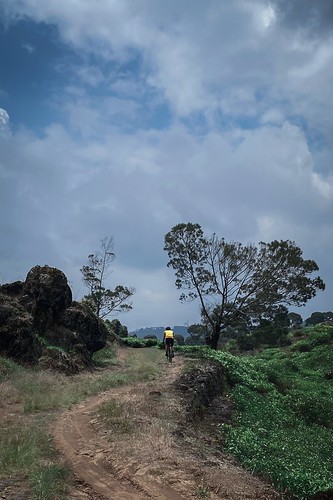 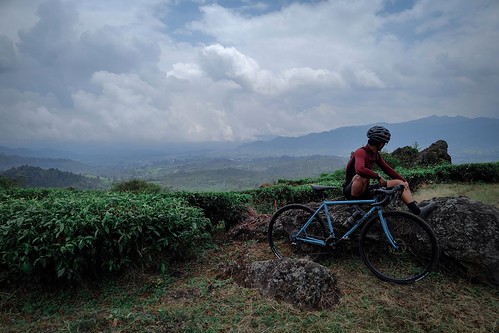 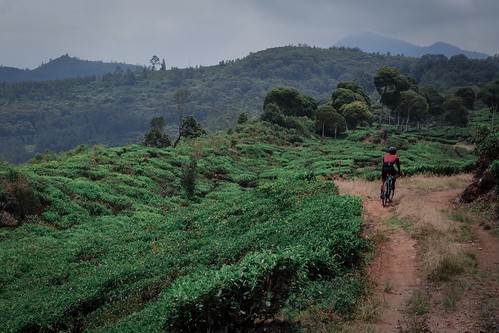 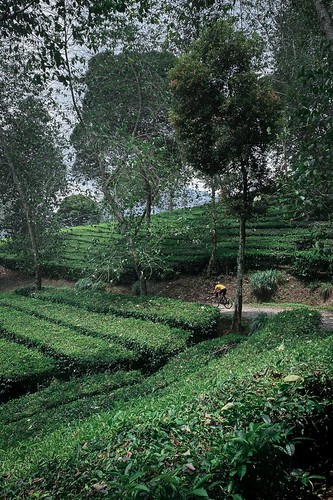 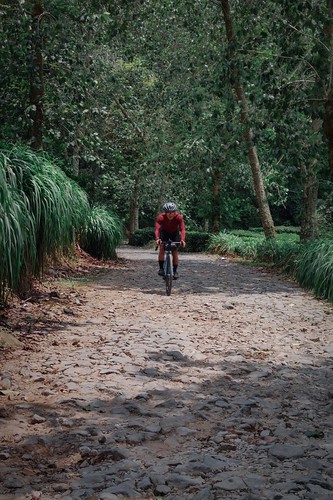 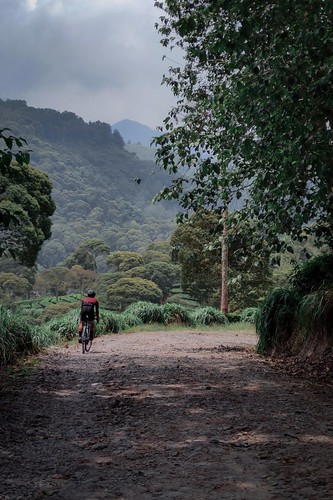 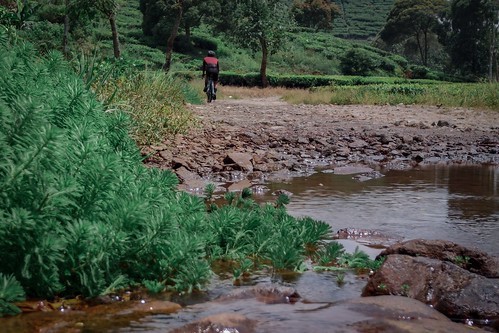 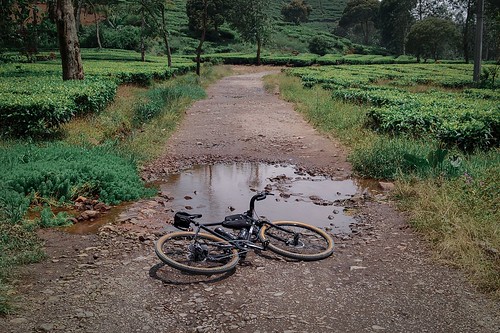 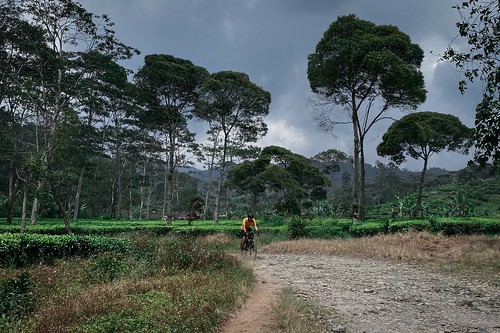 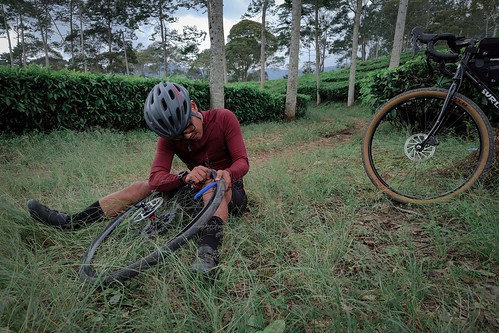 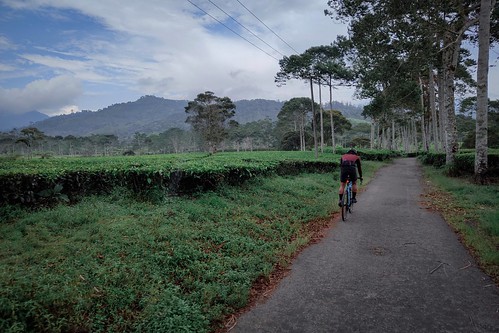 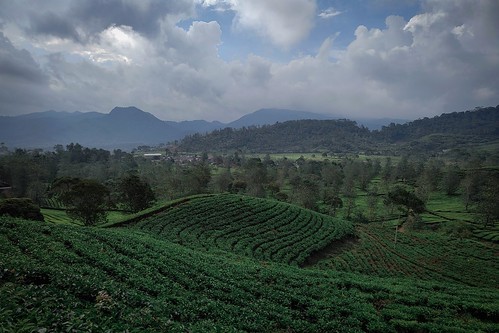 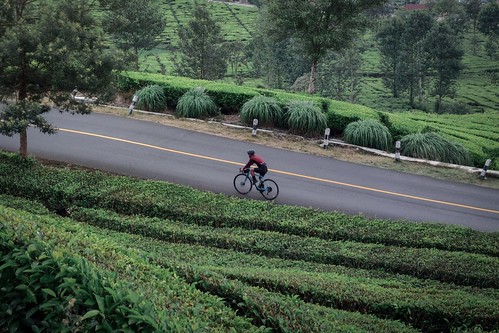