Here’s a little known fact: few bike upgrades—if any—comes close to the value of great tires. That ultralight aero wheelset your fellow cyclists have been raving about? Will perhaps improve 2-3% of total performance. That overpriced, oversized ceramic derailleur pulley? Good luck ekeing more than 1% of performance gain out of it. A pair of supple performance rubbers, on the other hand, is a potential game-changing gem; it can easily gain as much as 5% of performance increase compared to stiff, touring model—equal to the performance gain of dropping 7 kg off the bike. Supple tires, especially the wider ones, also improve comfort in a way carbon handlebar and/or seatpost can never match.

Tires, therefore, should occupy the top of bike upgrade/improvement list.

Just days after I finished my Surly Midnight Special allroad/gravel build, the gravel tires I wanted finally made their way to Indonesian market. I was at first thinking about keeping the tires I already installed—the 27.5 x 1.75 Maxxis Pace, after all, is a cost-effective, long-lasting tire with happy users around here. With closely-spaced knobs, however, the XC tire was noticably draggy on pavement, which made up almost 80% of my rides. It wasn’t a big issue, to be fair; yet at times, I couldn’t help wondering, if gravel-specific tires will serve me better…

Eventually, it was the tire’s sidewall color that led me made the call to switch: all black bike with black tires might look sleek, but proved to be a challenge for outdoor photography. As much as I dislike following the trend, tan sidewall will give the bike the much-needed accent to help it stand out better in its natural habitat. Petty excuse, you say? I won’t argue against that 😀 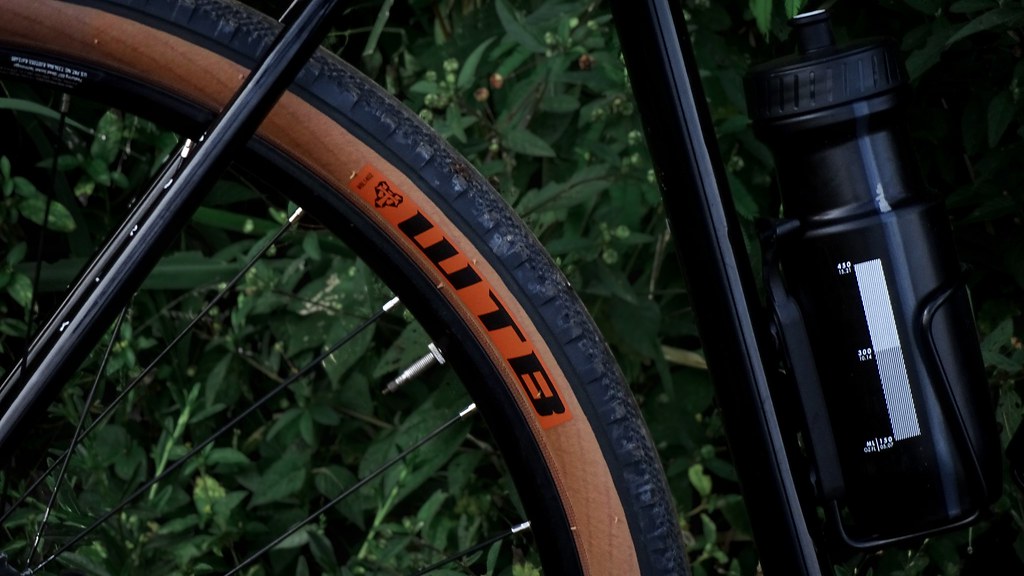 Why Byway, By The Way?

Here’s the problem with gravel-specific tires: They come in wide array of option—from race-inspired slicks all the way to MTB-style mud-munchers. Finding the best tires, therefore, required thoughtful assessment about the kind of ride that we do.

The 650b x 47mm WTB Horizon roadplus tire that comes with Surly Midnight Special stock build garnered favorable review for its on-road performance, while the combination of plump carcass, slick tread, and tan sidewall looked aesthetically pleasing too. The absence of any substantial tread, on the other hand, became a liability when the pavement turned to dirt, which still made up around 20% of my rides.

Sitting at another end of the same manufacturer’s spectrum, was the all-season, all-terrain WTB Resolute. Frequently rated as one among the best gravel tires, the square knobs bite well to any surface, including mud, while the round profile and supple casing help with on road performance. There is only so much drag can be minimized by knobs arrangement, though, and it just doesn’t look as sleek as its semi-slick cousins.

Touted as “dirt-centric” roadplus tire, the Byway featured slightly-pronounced side tread compared to the Horizon, which is said to improve rough road handling capability immensely, while retaining that round profile for on-road cornering predictability as well as that classy aesthetic. Even better, the updated slick centerline was said to be thinner, which resulted in lower rolling resistance compared to its slicker cousin! It sounded like the perfect allroad/gravel tire I was looking for.

There was a complication, however: just when I decided to pull the trigger, it was out of stock everywhere! With other models still in stock, it became clear to me that the Byway was a favorite among 650b gravel cyclists around here. Luckily @andhikayudi_ of @bikesystem.id offered me a hand. Just three days after I made the order, he asked me if I was going to pick up the tires soon. They managed to get the last remaining stock for me, at a bargain price too! If you live somewhere around Bandung and need something related to cycling, I highly recommend you to reach out to them—I was happy with their service, so will you. 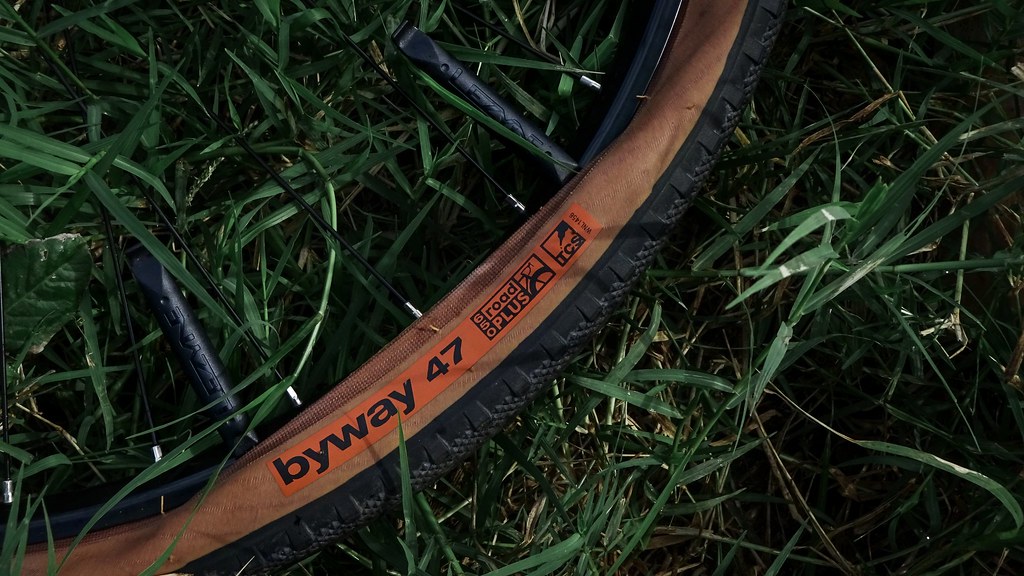 What could possibly go wrong, right?

That was what I thought when I decided to take the tires home and install them by myself. It was a sunny Sunday morning; @bikesystem.id ‘s manager @cyclistgeek had offered me to install the new tires at their workshop. Seeing how the workshop load was high, and that I had to drive my wife someplace too that morning, I turned down his offer. I’m no mechanic, but I’m familiar enough with removing and installing tires—or so I thought.

The next morning turned laborous; removing the tire from tubeless rim turned out to be a struggle! Putting on the new tire was even more nightmarish; I spent almost two hours trying to get the tire into the rim. I frantically googled tips and tricks to do them properly, and none seemed to work. By the time I came up with a noble solution involving a pair of tire levers, my hand was already full of bruises and blisters. I managed to work on the second tire much faster—under half an hour—but a hasty move snapped that cheap multitool lever! I threw it out of frustration, but managed to finish the installation nonetheless.

Throwing tire lever was what fellow cyclist @rihanrachman admit of doing too when installing a WTB tire. Seeing the plasters all over my hand, he told me that he personally avoided the brand’s tire; it was frustrating to install, even more so to remove! Realizing the potential horror of handling flat tire in the middle of nowhere, I ordered a set of reliable tire lever—Lezyne Matrix—online and googled more tips and tricks while waiting for its arrival. By the time the lever turned up at my doors, I had come up with the installation/removal method involving the use of rim’s well. I experimented right away; even with half-healed hand, removing and reinstalling a tire took less than 20 minutes! In fact the 10 minutes was spent to inflate the tire—it took around 750 strokes to seat the bead with Topeak Micro Rocket. Yes, I counted each stroke if you’re wondering 😀

Now that I’ve managed to handle the tire with finesse when needed, I can go ride far again with confidence. 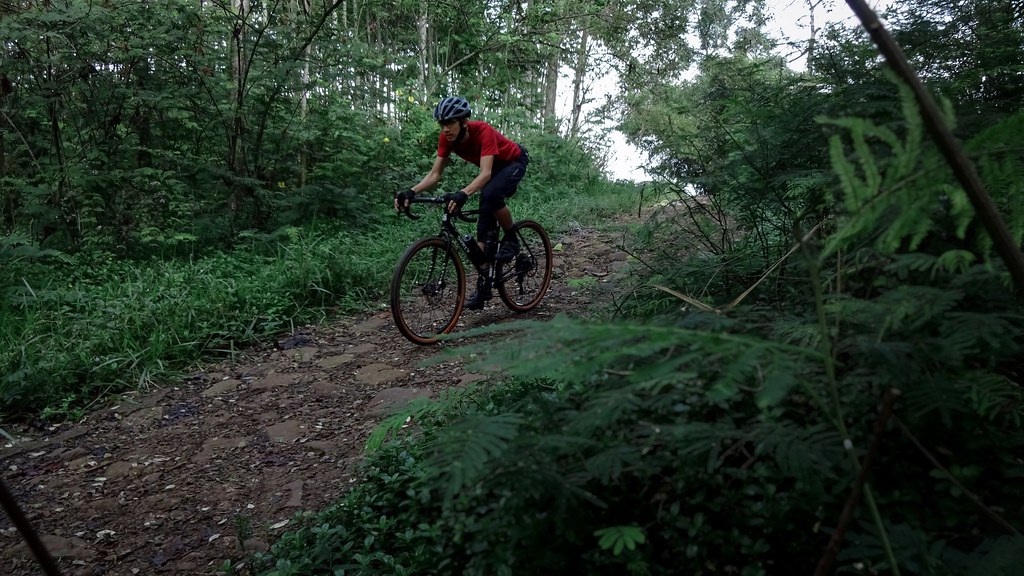 How Does It Ride, By The Way?

Buttery-smooth—it was my first impression when rolling my bike with the new WTB Byway out of the garage. Gone was the draggy hum, and the micro-vibration I wasn’t aware of before—the vibration of tire knobs continuously hitting the surface of the road.

Measuring 44 mm in width, it was exactly as wide as the 27.5 x 1.75 Maxxis Pace it replaced, 3 mm narrower than the printed ETRTO number. The suppler casing, though, gave it the impression of being more voluminous. The way it cushioned road bumps and irregularities instantly caught my attention—it felt like riding on a pillow! Combined with its rolling smoothness, I could see how the tire would provide better comfort and minimize fatigue on long rides.

A city commute revealed how it rolled and maintained speed efficiently along pavement. It’s amazing how the tires pick up speed whenever the road turned downhill—as if I had been riding with a brake slightly depressed all this time, and it was finally released! Even more surprising was its cornering capability; it felt planted and secure, allowing me to go faster, lean lower, than I’m usually comfortable to do. It would be much fun attacking twisty mountainpass descend on these tires, for sure.

On dirt and gravel road, the semi-slick tread gripped just fine—provided it is dry. It was doing fine too on wet hardpack, as long as the gradient isn’t too steep. Though felt rather insecure, I even managed to ride across puddles of mud by keeping certain speed and momentum; going too slow resulted in the tire slipping around. As expected, it struggled in long stretches of mud as well as wet rocks and grass, but they only made minuscule part of my ride; I felt safer to walk over them anyway, regardless of the tire I use.

There was one small niggle about the tire, though: given the same pressure, it felt less sprightly compared to the Maxxis it replaced—it took slightly more oomph to accelerate. Indeed the Byway is ~60g heavier a piece than the Pace, but I suspect it was the pillowy casing that plays larger part. Indeed raising the pressure gave it better responsiveness, but sacrificed that lovely cushiness; it seemed having both at the same time is impossible. 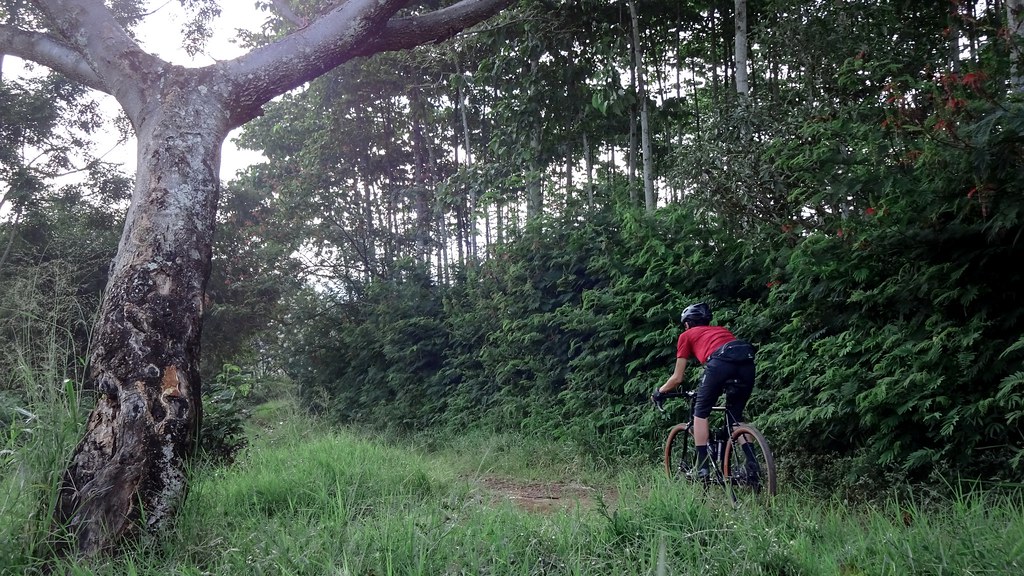 Is WTB Byway the perfect allroad/gravel tire we were looking for?
To me, it checked many boxes. The slick centerline resulted in smooth, efficient, almost noise-free rolling, without sacificing grip in dry dirt; the round casing with shallow side tread pattern resulted in excellent cornering stability and predictability; the supple casing provided excellent cushioning and extra comfort in bumpy terrain. Combining them all in one package made WTB Byway a great choice for many riders—be it those riding long distance adventure across dirt road, or even bike commuters, especially those living in cities with shitty pavement.

Naturally, it has its own limitations, too. The semi-slick, road-oriented design means it behaved erratically when pushed to mud, dewy grass, or wet rocks. Indeed to me, they only made up a fraction of my ride; I personally preferred to sacrifice the all terrain capability for a tire that performs excellent on more than 80% of my ride. That being said, if your definition of perfect allroad/gravel tire is the one that can handle all kind of riding surface, despite inevitable cost of reduced smoothness and efficiency—something closer to that of mountain bike’s—then clearly this tire isn’t a perfect choice for you.

Overall, WTB Byway performs excellent for its intended use. Yes, it’s on the weighty side, yet in reality, it felt just fine on most riding scenario. It struggled on more challenging terrain, but it has never been its selling point to begin with. Thus, if your definition of allroad/gravel ride is miles and miles of paved and dirt road (like mine), WTB Byway is one among the best option available out there. 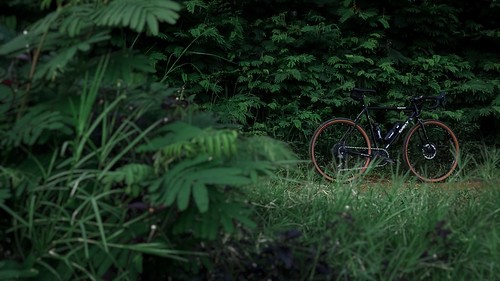 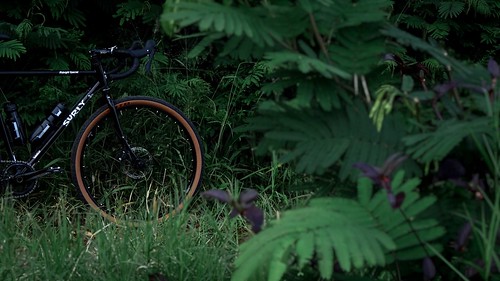 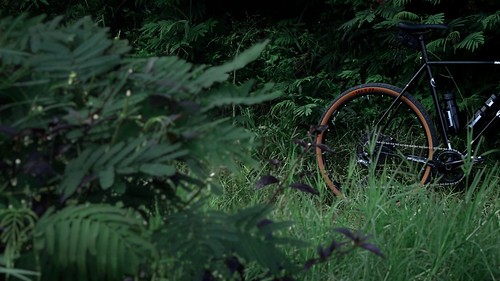 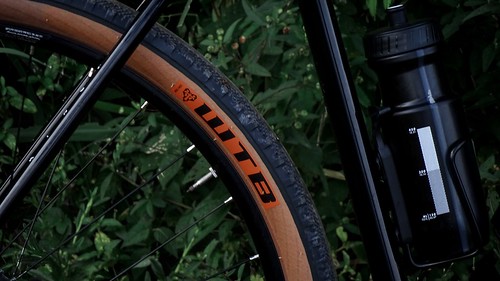 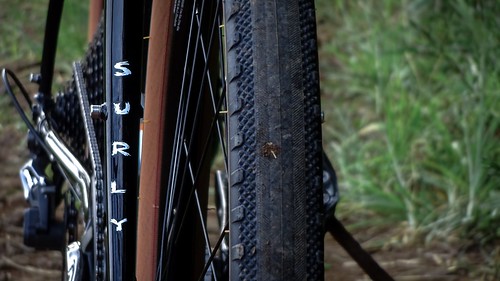 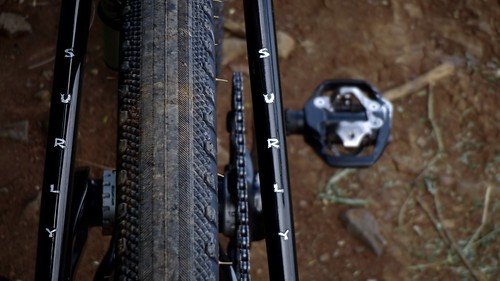 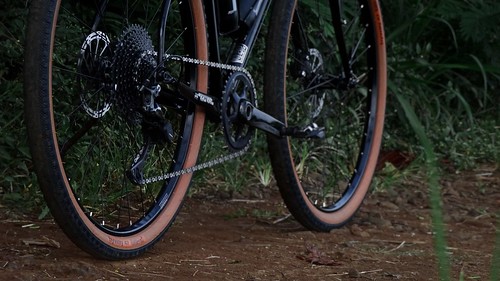 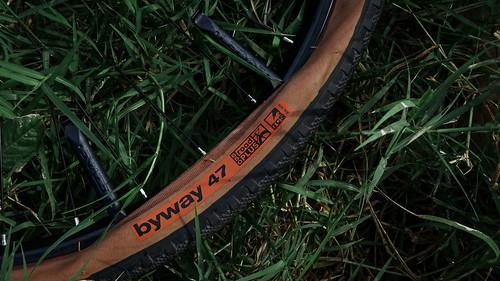 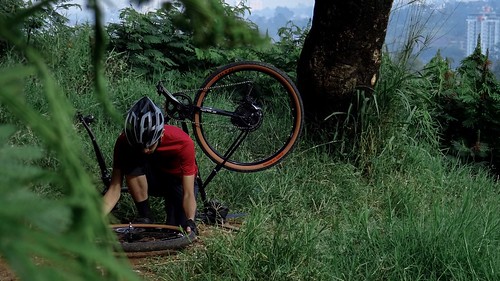 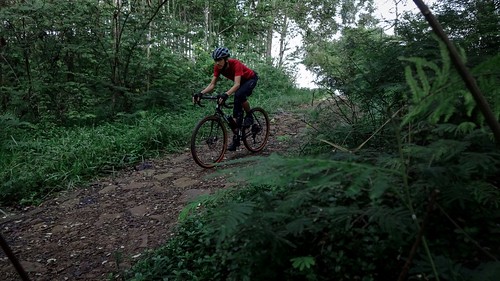 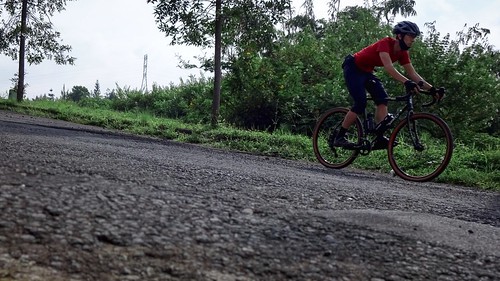 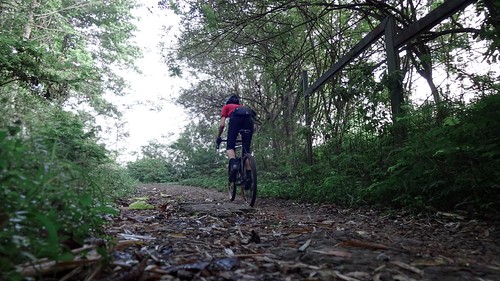 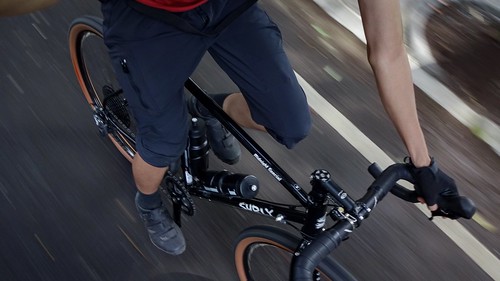 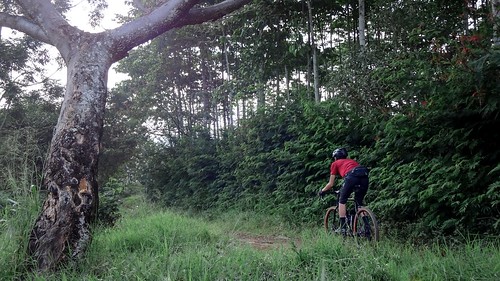 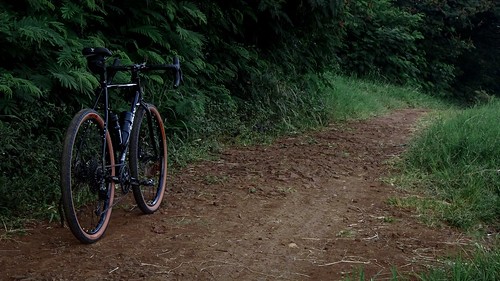 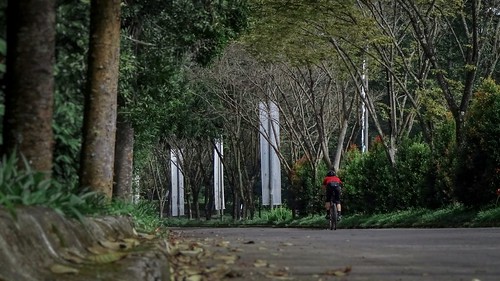 6 thoughts on “In Search of Perfect Allroad/Gravel Tire: A WTB Byway Review”