If you can only have one bike, how would you build it?

Against widespread adoption of N+1 principle among cyclists, I have long been a believer of “one bike to rule them all” approach. For me, it made much more sense. On a multi-terrain cycling adventure, changing bikes to suit specific terrain condition isn’t an option; not even changing wheelsets. Combining long stretch of paved road, long climbs, rocky gravel road, steep twisty descents, even singletracks, such adventure demands one bike capable to tackle them all. Granted, such a bike will not excel at any particular task; it will, however, do well on almost any challenge a cycling adventure throw at it.

After six years and plenty of cycling adventures with Scotty—a modified 26 inch-wheeled, 2010 Scott Scale 70 XC bike—I finally made a call to invest on a bike specifically made for the kind of cycling adventure that I do. Today, allow me to introduce you my new allroad/gravel adventure steed: a custom-built Surly Midnight Special. 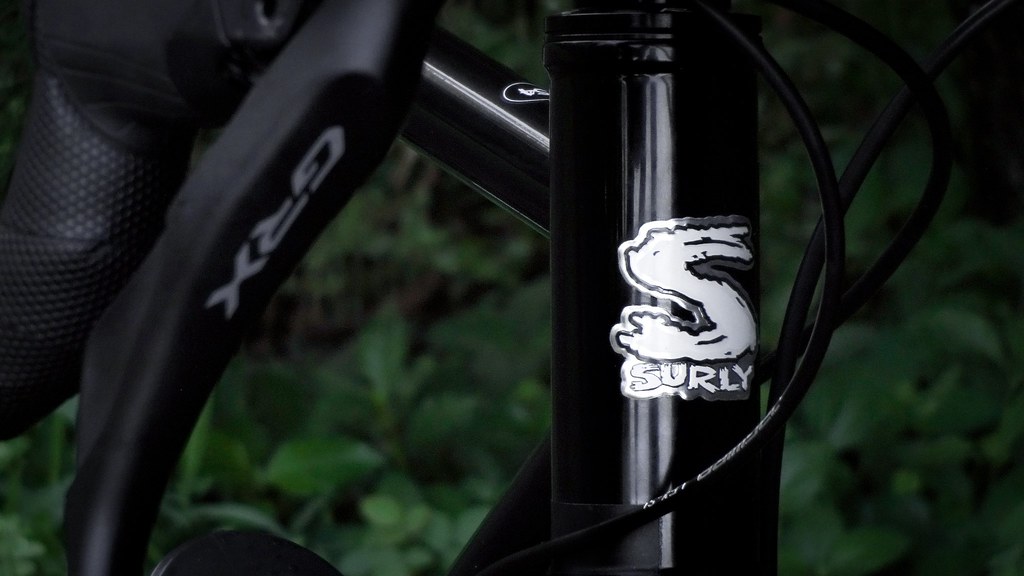 To be honest, Surly frame wasn’t my first choice.

Ordering a custom steel frame with custom geometry was what I initially had in mind. Back then, however, the frame builder was unfamiliar with flat mount disc brake standard I requested. Perhaps it was a blessing in disguise; it was only later I found out that custom frames made here in Indonesia were imprecise at times, which could require tweaks and reworks—the kind of headache I want to avoid.

Local brands were my second choice. There was one particular local brand which has its own adventure/gravel range. The aluminum frame and the full build kit was great value-for-money. Being an old model, however, the stock was running out, and there was no sign of newer version’s launch anytime soon. Add in the fact that there’s no clarity whatsoever about the frame’s features—especially max tire clearance in 650b—I was forced to look elsewhere.

There was another option from a local boutique brand, which just happened to launch their second gen of their cyclocross/gravel/allroad steel frame. My inquiry regarding max 1x chainring and max tire clearance in 650b wheel, however, was treated with ignorance (while they kept spending times boasting their product’s versatility and publicly interacting with their own inner circle). The way they treated potential customer—their exclusive attitude overall—convinced me that their product doesn’t suit my spirit of cycling.

That was when I found Surly Midnight Special. Surly has extensive technical information about their frame’s specs, as well as lively Q&A section on every product line’s webpage—great sign of true passion over marketing gimmicks. On paper, the Midnight Special has steeper angles that I’d like, but the brand’s “fatties fit fine” philosophy guarantees larger tire clearance than I’ll ever need. Independent reviews rave about its ride and handling quality, with the full build’s brakes and rims as the only downsides—hence the decision to buy the frameset only. The price was rather steep, though, especially compared to local options I had considered earlier; to me, however, it was worth it. 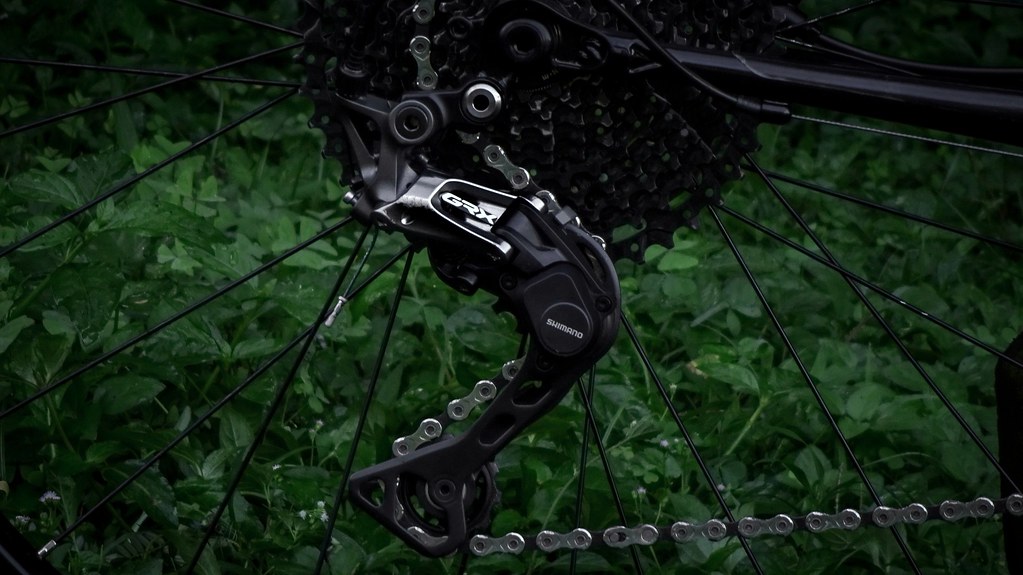 Shimano or Sram? Such was the question commonly faced by those looking for their bike build’s drivetrain—the question that I faced myself, too.

Back then, Shimano just launched its gravel-specific groupset: Shimano GRX. Its biggest appeal, to me, is the ergonomics of the lever, which feels comfortable and intuitive to use—despite the fact that the mechanical version didn’t get the rough road improvement redesign of the Di2 one. A late night chat with @andhikayudi_ convinced me further to go with it.

There was one issue with the GRX, though: the crank is reported to have slightly wider q-factor than road bike’s standard. Shimano stated it was designed to improve chainline and performance on gravel bike’s wider tire. I didn’t buy that, however, since most gravel bikes prior to GRX launch seemed to do just fine with standard road cranks. In fact, narrow road q-factor was one among the things I was aiming for on my new bike build.

And there came the second problem: Shimano has no road crank specifically designed for 1x chainring—only 2x cranks, which would be slightly sub-optimal when converted to 1x.

That was when I turned to my second preference: Sram Rival 1. The road crank was specifically designed for 1x chainring, and was widely used on gravel bikes prior to Shimano GRX’s launch. It looks great, too. I bought and installed the crank, thinking it was the perfect answer to my problem, until later I found out that its q-factor is inconsequencially 1 mm slimmer than GRX’s—certainly still in the road crank q-factor region anyway.

I had nothing to regret, though. In fact, I was thankful. It’s nice to see the competing brands coexist and work in harmony on a bike. Because, why not? 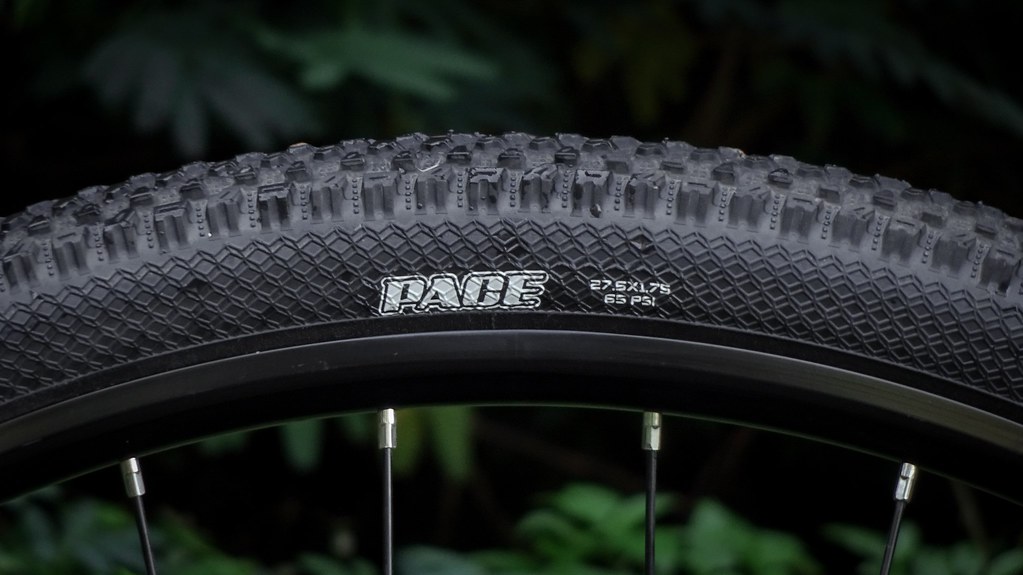 One of the biggest drawback of Surly Midnight Special’s full build—based on several review I’ve read—was its rather heavy, non tubeless-ready, rim. Since the weight at the rim affects overall bike’s speed, acceleration, and handling, I made it my primary criteria when searching for suitable rim. I, however, shunned the idea of having a carbon wheel.

After relatively short time of researching, I bought myself Stan’s Notubes ZTR Crest Rim—a decently-priced lightweight, tubeless-ready aluminum XC rim. At 680 g/pair, it is lighter than many carbon rims out there, and has decent internal width suitable for wide tires. There’s a caveat, of course: it’s not compatible with high-pressure setting—something I can live with, since I always use high-volume, low-pressure tire; thanks to my feathery body weight, I rarely exceeded 35 psi, even for smooth tarmac. Paired with lightweight D711SB/D772SB Novatec hubs @edmundjeds suggested, it makes a wheelset with respectable weight comparable to gravel-specific ones 3-4 times the price—even with 32 spokes front and rear, which should guarantee strength for gravel adventure abuse.

Unlike the rim, the stock build’s semi-slick tire—650b x 47mm WTB Horizon—garnered favorable reviews from allroad cycling community. The terrain I’m riding, however, often requires stronger treads. Gravel-specific tires, though, are rare—and outrageously overpriced—here in the country. Thankfully, one particular XC tire comes with the perfect size for gravel grinding, and is widely available on local market. The 27.5 x 1.75 Maxxis Pace comes with 42 mm of width—44 mm when mounted to the wide-ish rim—slightly smaller than most 650b allroad/gravel-specific tires. It is slightly lighter, too, though, which I expect would offset the rolling resistance from the more pronounced treads, to a degree. I’m fine with the fact that it isn’t tubeless-ready, because I’m setting it with tube anyhow; with only a puncture roughly once every two years, topping-up tubeless sealant for every three months sounds like too much of a maintenance hassle to me. 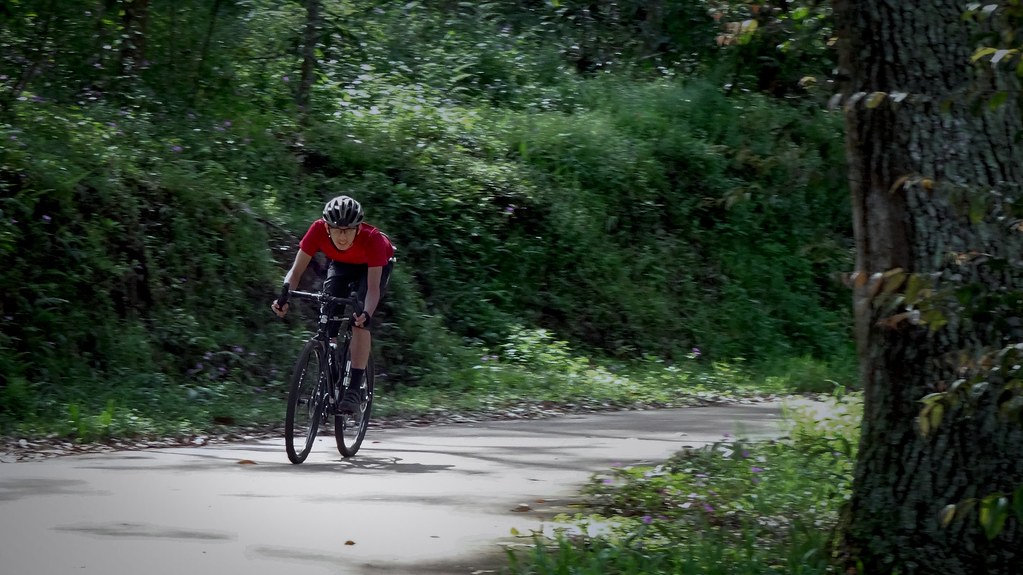 With all the talks about the kit, the most important question was still left unanswered: how does the bike ride?

Since the build completion and setup by @edmundjeds and @jackal_wolf of @bikesystem.id, I had ridden the bike for short commute and weekend getaway. Longer, more diverse route that reflects true cycling adventure, however, was required to test the bike’s capability. With long climbs, twisty descends, rocky gravel sections, and straight flat paved road in sub-60 km package, Palintang Pass seemed like a perfect testing ground.

Accompanied by @andrei_yusup on early Sunday morning, I rode eastward across main road to Pasar Ujungberung, followed by 10 km of 8.5% climb to the north. Surprisingly, the bike climbed just fine, despite its weight of over 12.5 kg with pedals, full bottle & cage, saddlepack, and pump strapped. Granted, I didn’t check my speed, but the uphill effort was perfectly enjoyable—which is what matters on an adventure trip anyway. There’s no doubt that the fitted 11-46 Sunrace cassette helps, despite the official lowest cog capacity of RX812 derailleur rated at 42t; slightly downgraded shifting performance feels like a small price to pay for easier gear for sustained climbs.

From the peak, the road turned downhill across cinchona plantation. The treaded tire hummed along continuous clicks of spinning freehub, as my speed across the smooth concrete road increased. It was here that the sorted frame geometry showed the outstanding handling reviewers have been raving about; it’s responsive, agile, and precise at the same time. Pointing the bike where to go and leaning it into corners were effortless and intuitive. Supported with Shimano’s reliable hydraulics disc brake, tucking on the drops and flowing along the twisty descend was a perfect joy.

And then the road turned to rough, rocky gravel just around a corner.

I hit the brakes and braced myself for the rough ride when… I found us doing just fine. The 42 mm tire certainly helps with shock absorption, but it was the frame’s flex and dampening quality that kept the tire planted instead of bouncing around like runaway basketball. It’s unbelievably smoother than my old alu rigid bike with 54 mm tire. Granted, drop bar setup and full-on road geometry, didn’t inspire as much confidence to attack such gnarly track as flat-bar MTB. Knowing the bike rolled such common adventure track just fine instead of struggling hard like I expected, however, put a big smile on my face.

So, back to the most important question: how does the bike ride? To be honest, there was time when, due to the bike’s seemingly excessive weight, I thought I would’ve perhaps been better served with lighter aluminum frame. The test ride, however, showed me that for adventure riding, bike weight is on the brink of irrelevance. The bike’s subtle quality—the outstanding handling from well thought-out geometry, as well as the smoothness from frame flex’s characteristics—on the other hand, truly complemented the kind of ride that I do. Yes, it wouldn’t excel for snappy sprints or attacking gnarly terrain, but I’m not doing them anyway. As I returned the bike to the garage, noticing the specks of dirt and dust from the ride, I knew, with all my heart; it’s a perfect partner for the adventures to come. 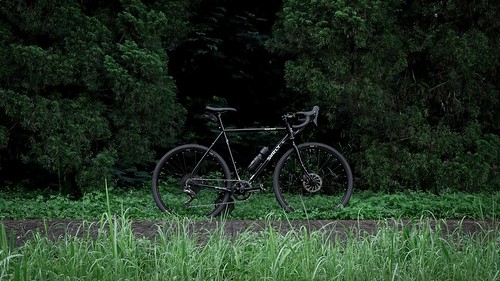 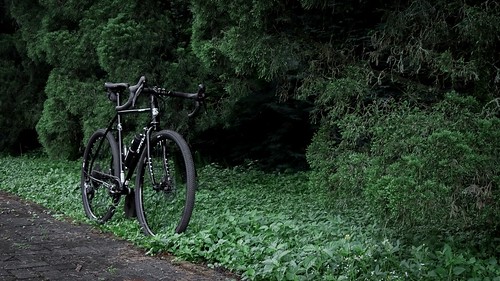 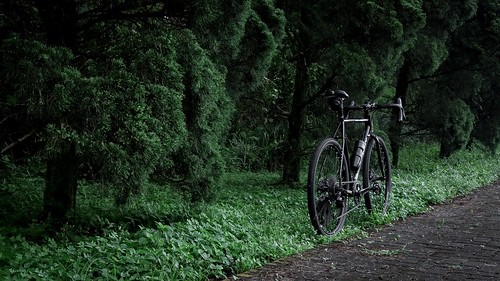 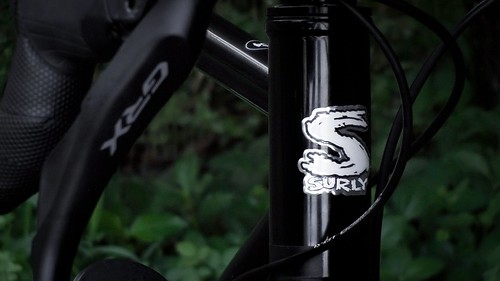 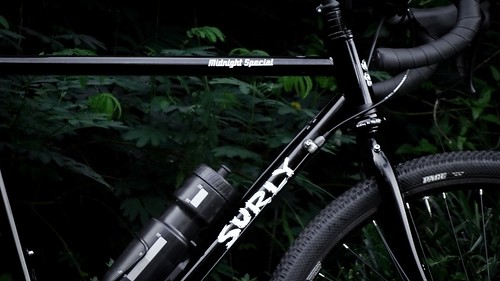 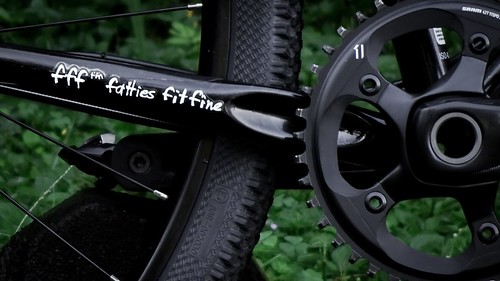 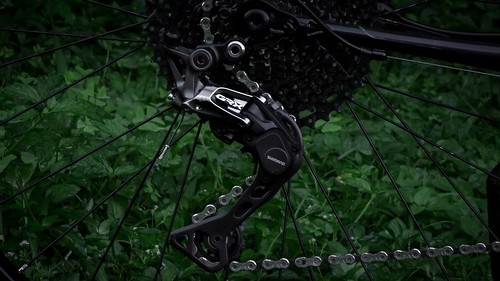 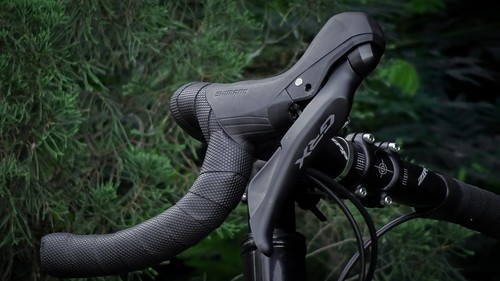 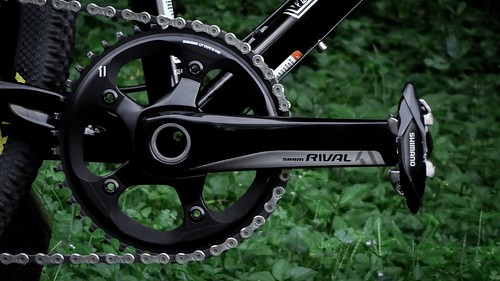 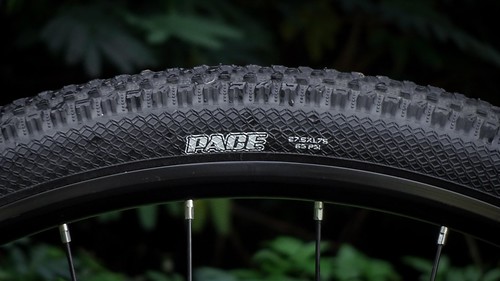 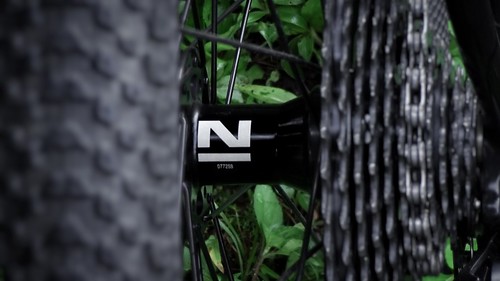 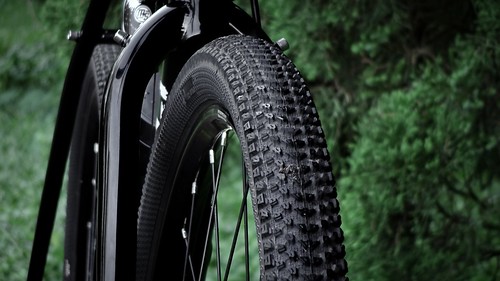 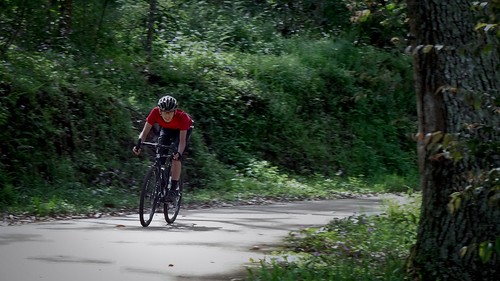 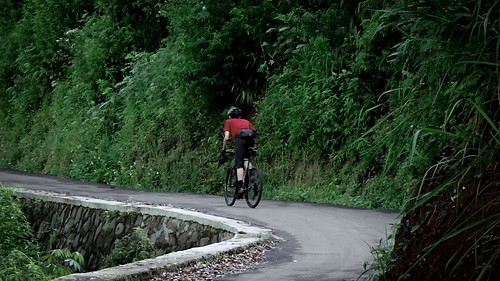 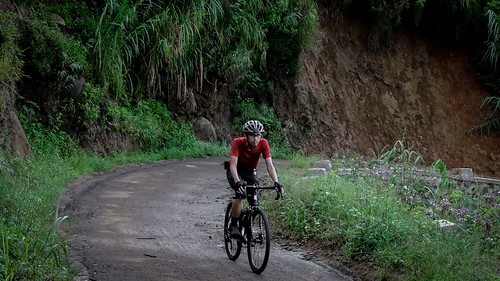 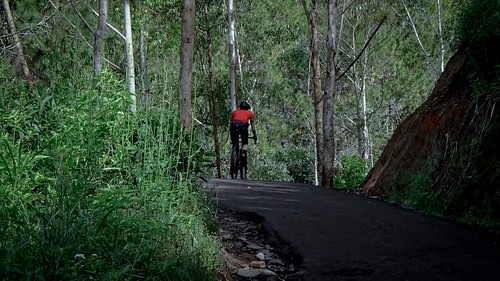 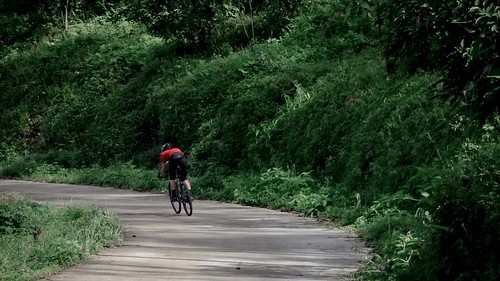 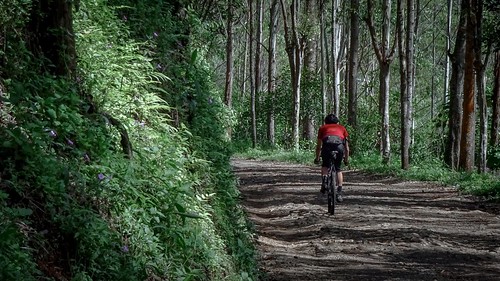 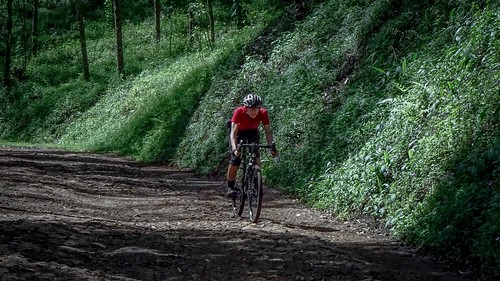 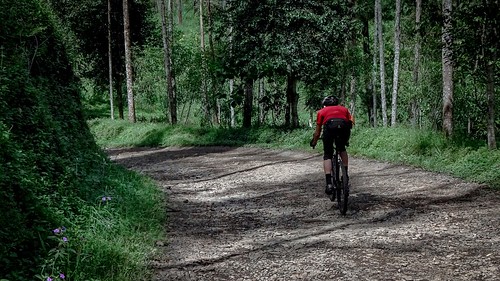