Kamojang Pass has been calling for a while, and I must finally go.

It began as a whisper; seeing @bayuwhy on the first day of Palintang Pass Double Weekend Ride brought back the memory of him taking me to the arduous climb of the pass. I promised myself to return to Kamojang Pass since then, but it had remained a mere wish; that was, until flurry of follow-up calls came one after another: @dwisl’s ride photos, @fixedonyourflow’s (cancelled) endurance ride plan, and @hndrsyam’s ride log—as if Kamojang Pass was reminding me of the promise I had made.

The sky was dark, with slight hue of purple and orange, when I began riding to the east. Instead of taking the main road through Gedebage and Sapan like eight years ago, I decided to take a smaller road through Al-Jabbar Mosque and Gelanggang Olahraga Bandung Lautan Api (GBLA)—two majestic buildings that became the center of corruption scandal and sent Bandung’s ex-Mayor Dada Rosada behind bars. Costing hundred billion rupiahs in total, the buildings are now standing in silence, as they gathered dust, rust, and bushes—a sad reminder of country’s wasted resource through abuse of power. At least they provided vast walking, running, and cycling ground for locals now—the view to surrounding ricefield and landscape is beautiful, too.

Crossing the Padaleunyi Toll Road bridge brought me to network of rural road across miles and miles of ricefield on Bandung’s southeastern region—the pristine view of surrounding mountains under blue sky and gentle morning light was soul-fulfilling. I kept my pace lower, embracing the beauty along the road, immersing myself in the passing moment… until I reached Sapan main road and rode further to Majalaya, where I made a short stop to refuel and take a leak.

It was there, in Majalaya, the start of Kamojang Pass climb awaited. 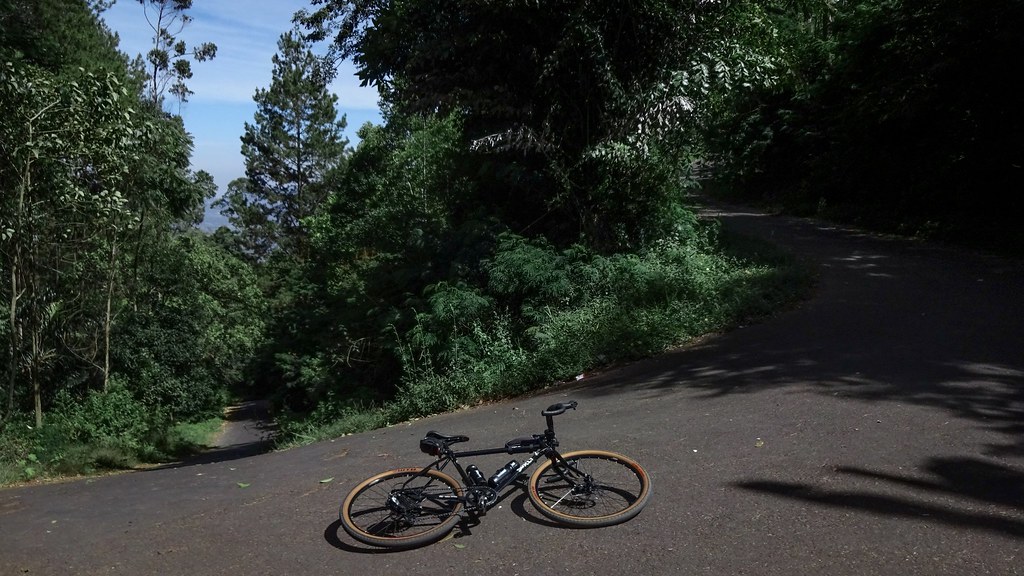 From total distance and elevation gain alone, Kamojang Pass climb is comparable to—if not slightly lower than—Palintang Pass, which I could tackle rather easily. The devil, however, is in the detail. Started with seemingly innocent gradient on its first half, the climb only reveals its ruthless, extraordinarily steep gradient on its second half. Eight years ago, I grunted my way up with 22×36 gear, and struggled to keep the front wheel planted when the gradient went north of 20%; this time, with 42×46 lowest gear, I quickly ran out of steam. For safety and endurance maintenance reason, I decided to get off and walk my bike on the steepest stuff.

The day had gotten hotter when I reached the Kamojang Hill Bridge junction and took a short break. Built in 2015-2016, the iconic bridge—and the following road—served as safer replacement route. In honor of my 2012 ride, however, I decided to take the original route instead. Known as Monteng, the road has mostly been abandoned, for good reason; with the climb reached the gradient of 32%, the narrow road was well-known as traffic accident hotspot. It was good to see how the nature began taking over—the bushes had grown thick and swallowed almost half of the road’s width.

It’s amazing how tiring pushing the bike uphill could get—I could only get back to pedalling when the climb went south of 10%, just few hundred meters before the route merged with the one from Kamojang Hill Bridge. Taking a stop at the roadside, I stumbled upon a hunting prohibition notice board issued by Pertamina, the company that ran the geothermal powerplant complex in the region. Indeed, the presence of powerplant complex itself helped protected the surrounding forest from people settlement. I couldn’t help wishing we had more geothermal powerplant in our mountains; they provided clean energy and helped preserved the mountain forest at the same time—what’s not to like? 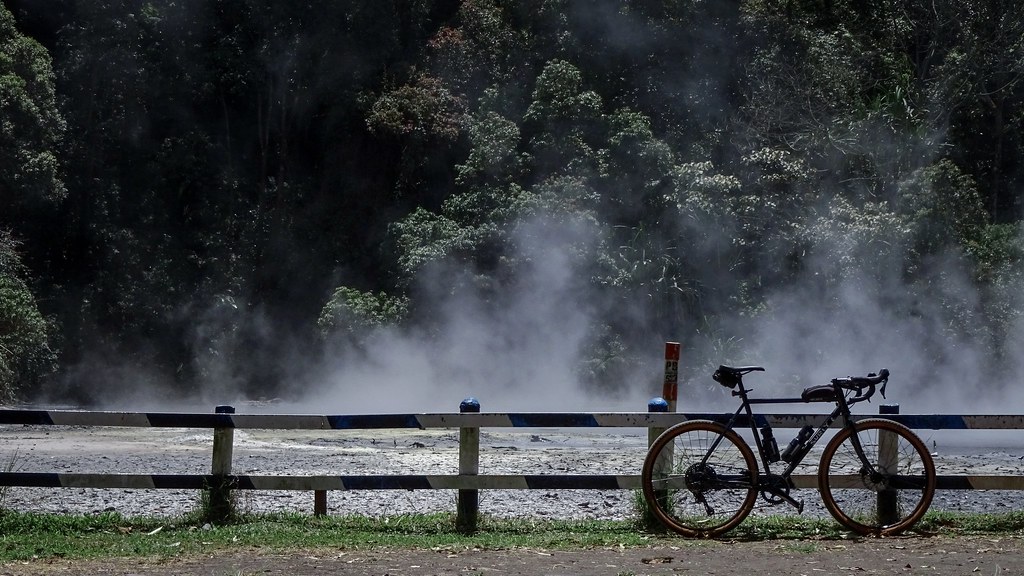 Unlike eight years ago, I took the turn to the east, and climbed further through geothermal wells complex as well as short section of lush, well-preserved forest. My destination was Kamojang Crater—a natural tourism attraction in the region. Despite the name, it wasn’t actually a volcanic caldera; it was, instead, a group of active geothermal vents, surrounded by tight trees of the mountain forest. The bubbly, steamy cauldron was a minuscule show of the volcanic power that formed southern Bandung’s volcanic mountainrange, from Mount Guntur in the southeast all the way to Mount Patuha in the southwest.

Descending from the crater’s complex was a welcome reward after all the previous climb—at least initially. The Kamojang Hill Bridge route began with a short, mild descent with beautiful view of surrounding hilly terrain, before dropping to steep, twisty downhill—with max gradient of -18%, I found myself straining instead of enjoying the flow. On the iconic yellow bridge, I made a short stop to take few pictures and cool down the brakes. From there, the descent got even sharper—getting as steep as -25% gradient at times—that riding down felt almost like a fight for survival. There’s only so much bodyweight shift could be done on a drop bar bike with steep, traditional road geometry; going too fast meant increased risk of flying over-the-bar when hitting road bumps or sudden braking, while going too slow meant increased risk of brake overheating and sudden failure. Thankfully, @shimanogravel‘s GRX disc brake performed excellent; consistent bite power and precise modulation helped me got to through the descent without a glitch.

The sun was sitting straight on top of the head when I reached Majalaya. Despite the heat, the 30 km ride back home was pleasant, thanks to occasional view of vast ricefield and distant mountains under the clear sky along Sapan main road. With a short stop at a convenience store along the way, I managed to get back home rather refreshed, except for the fatigued legs—the farewell gift from revisiting the steepest, most challenging climb in Bandung region. 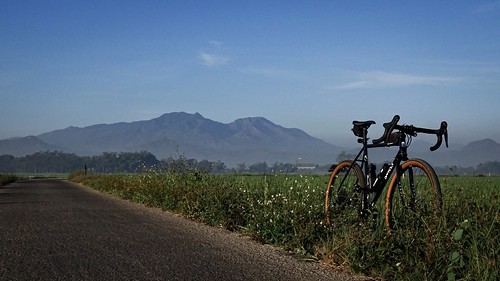 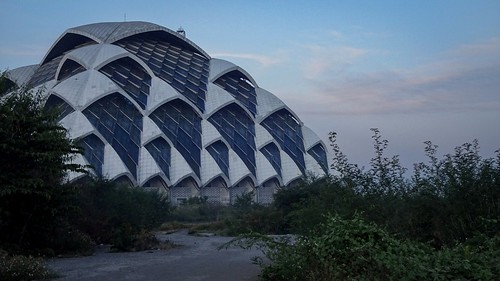 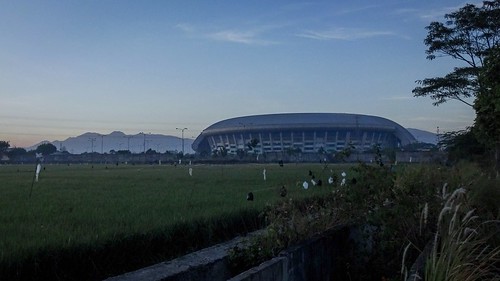 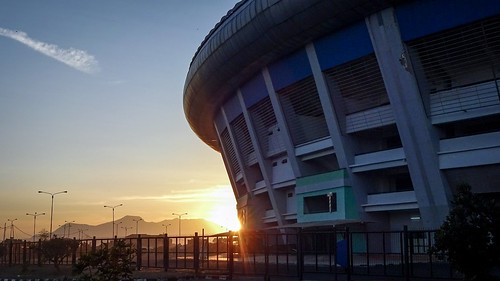 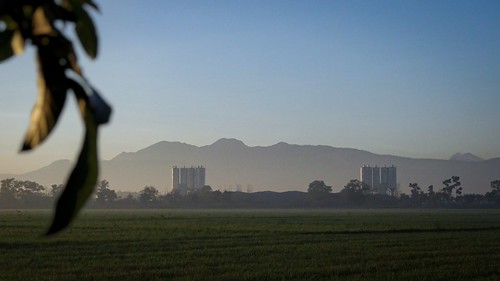 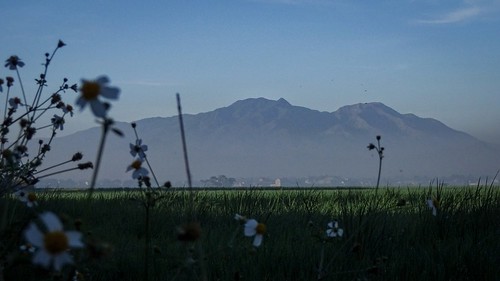 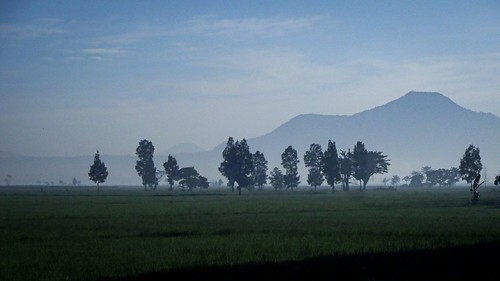 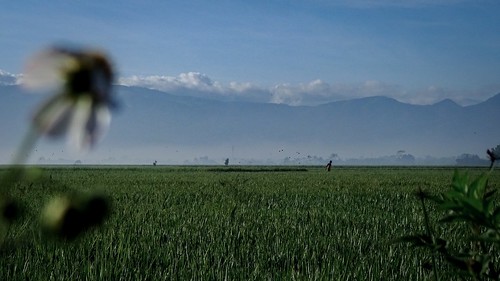 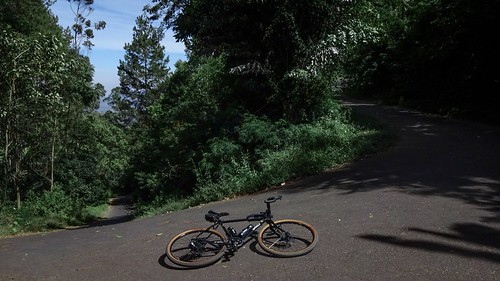 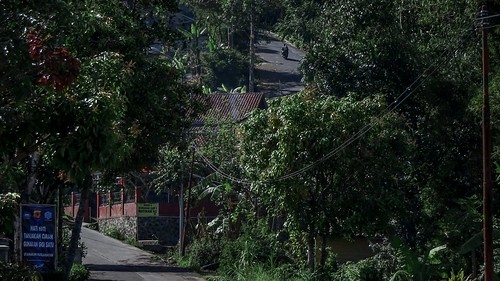 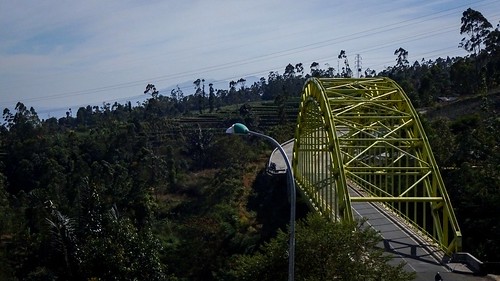 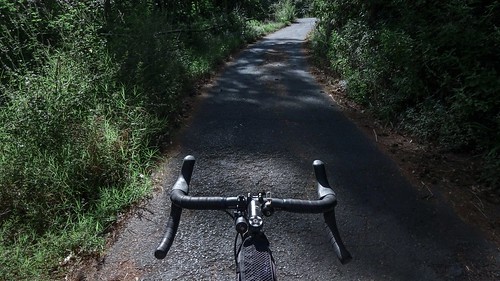 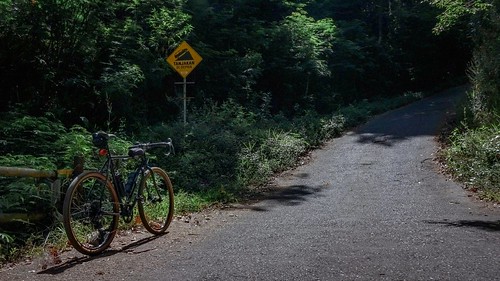 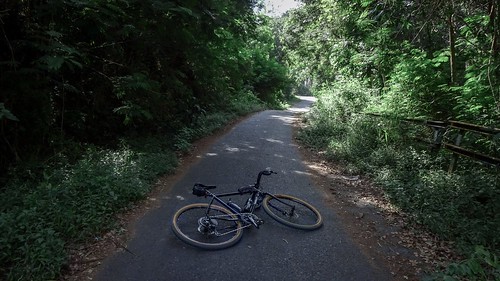 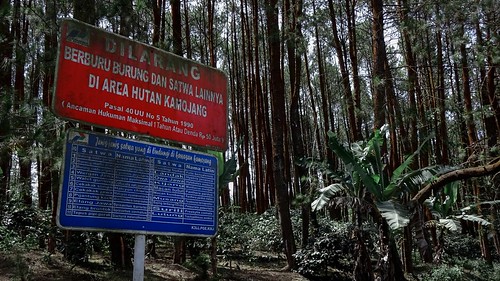 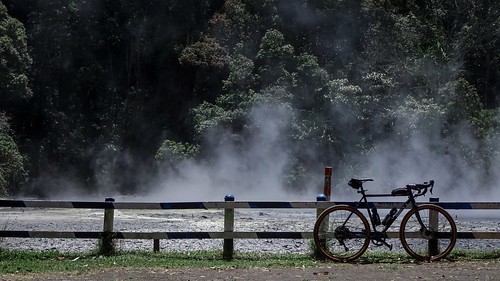 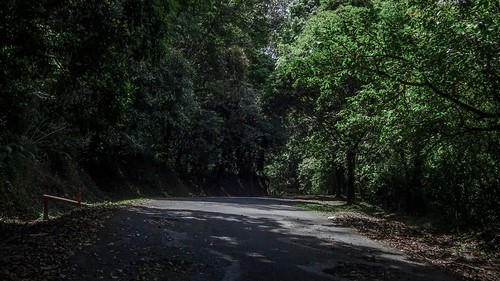 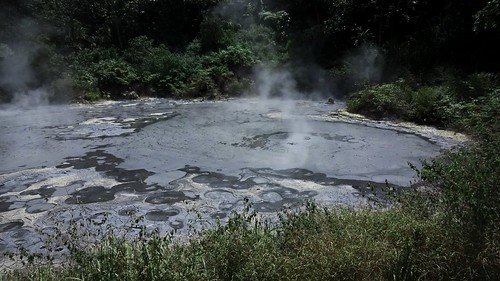 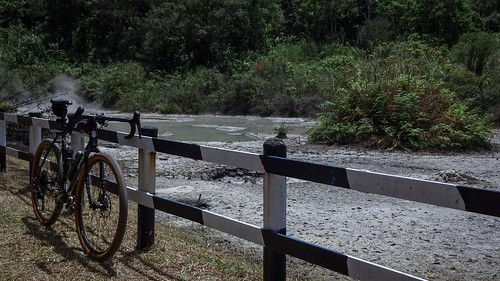 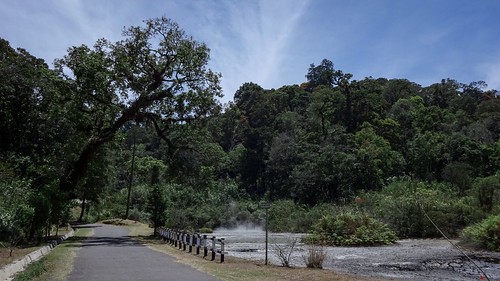 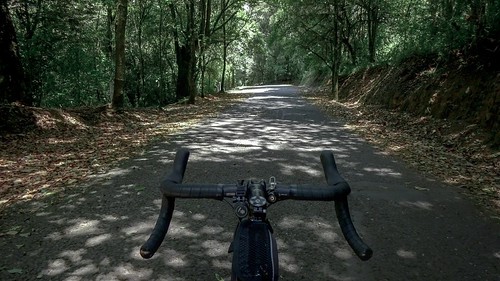 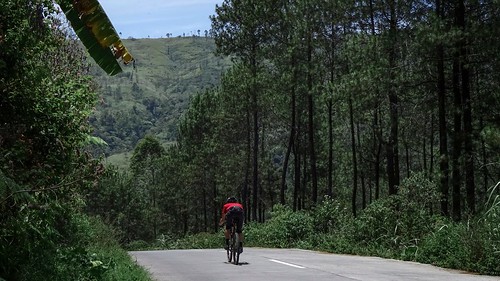 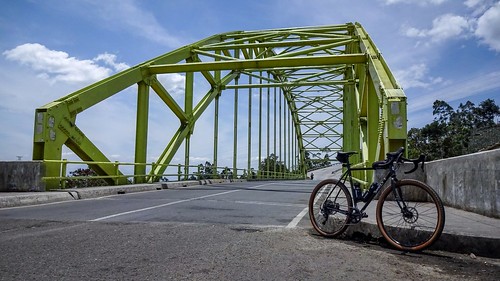 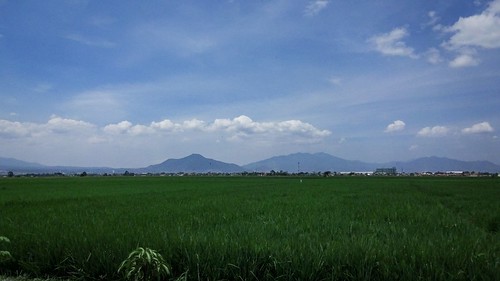