Stretching 24 km in southern Bandung region, Gambung Pass doesn’t share the fame of Ciwidey and Pangalengan, the two well-known tourism destinations that it connects. Rarely taken by tourists, however, the twisty road featured beautiful forest, tea plantation, and gravel sections along the way, making it a perfect route for enthusiasts seeking pure cycling experience away from bustling city traffic.

The cycling trip to Gambung pass began with 20 km pedalling session through city road to the southwest, all the way to the town of Soreang. From there, the easiest route to get to the start of Gambung pass in Pasirjambu is through Soreang-Ciwidey main road. I decided to give myself additional adventure along the way, however, and took the rural road across Leuweung Datar instead. Despite the name, Leuweung Datar (lit. “Flat forest”) is one among the steepest climb around Bandung, with average gradient of 9.8 for 5.1 km. Compared to the main road, though, the narrow road was far less crowded; only locals passed by occasionally. It seemed like a perfect route for this particular cycling trip—or so I thought, even when I was tackling the smooth early climbs.

It was only past halfway through the climb, when I found out that the steepest sections of the road—as steep gradient as 22—had been crushed to broken rocky road, presumably due to several rainy seasons and lack of maintenance. It was practically impossible to ride; even pushing the bike uphill was a real struggle here. Unlike the one seen on Google Street View, too, there were only rare views to surrounding hills and the city; the open fields on the roadside have been overgrown with tall bushes and converted to tree plantations.

The road was still as rocky, as harsh, as broken, past the peak of Leuweung Datar. The gently-hilly, mostly-rolling terrain, however, still allowed me to ride. Yet even with extra volume from 54 mm wide rubber and 20 psi pressure at both ends, the rough road shaked my body and rattled my bones. I had to keep my speed in check just for comfort’s sake. Well, most of the time, at least; there was one instance where I had to put my power down instead, when, with no apparent reason, a random local’s dog decided I was a threat and chased me with hostile stance. Sustaining a dog attack injury was the last thing I need for this trip! 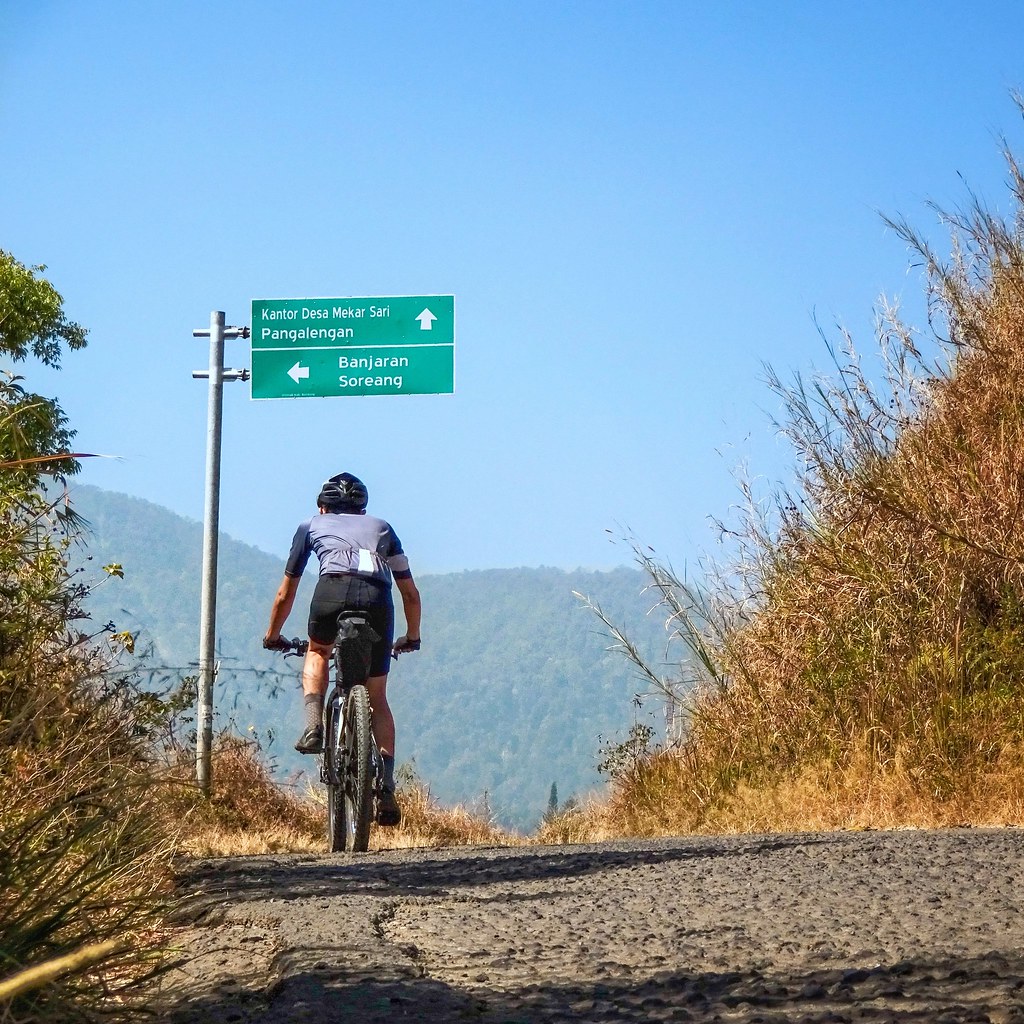 From road junction in Pasirjambu, Gambung Pass, my main destination, started off as a long, gentle, paved climb across settlements, which allowed steady pedalling. It was after the rolldown past the tea plantation’s entrance gate that climb turned steeper and twistier, though still nowhere as challenging as Leuweung Datar’s. Surprisingly, though, even after a long climbing session from the city, under the heat of tropical mid-day sun, with thinner air of higher altitude, it wasn’t as draining as I expected it to be—in fact I felt fresher compared to when I rolled along Tasikmalaya outer road under the same bright sunlight, on my previous cycling trip to Pangandaran. Perhaps it was indeed fresher, cleaner air of the mountain—or the view of tea plantation and lush forest as far as eyes could see—that made a lot of difference.

As I pedalled further along the pass, the tea plantation shifted to lush, well-preserved forest of Mount Tilu. The tight, lush canopy of trees, the buzzing choir of cicadas filling the air—climbing the pass all the way to the peak, 1,663 m above sea level, was blissful.

The flowy descending road under tight trees was what followed after the Gambung pass’ peak. Speeding and cornering along the road was so much fun! It was only when the terrain turned flattish, just before the forest shifted back to tea plantation, that the paved road turned to dusty gravel. Standing on the left side of the road was Mount Tilu, its lush forest surrounded—and protected—by the plantation, while on the right side, hilly terrain covered in trees and vast tea plantation gave subtle hint of extensive activity of numerous volcanoes in the region—Mount Patuha, Mount Malabar, and Mount Wayang-Windu to name a few. While none of them threatened to erupt and wreak havoc to surrounding community in near future, the volcanic power that shaped them are still active and working. 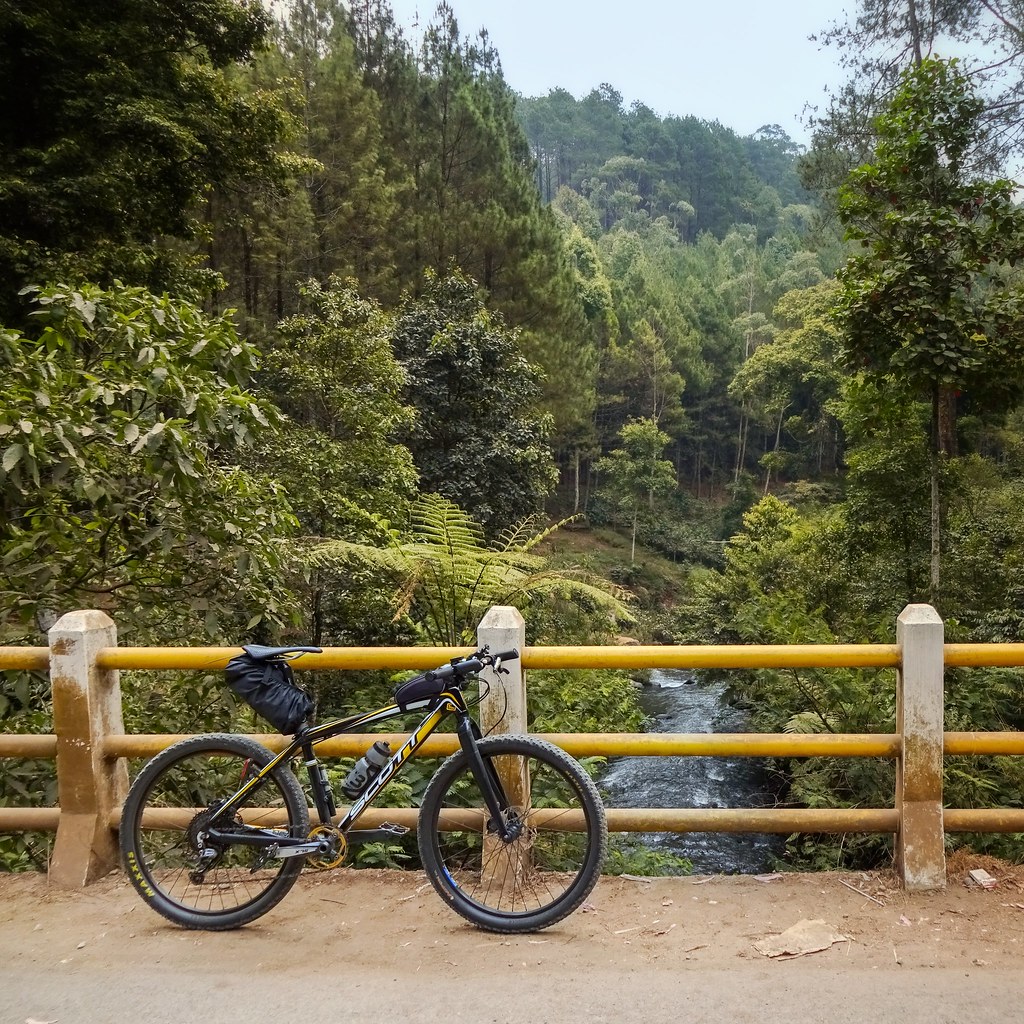 There was another section of rolling paved road across the plantation, before shifting back to harsh gravel road as it descended to pine woods. At the bottom of the descent, the road crossed Palayangan River, a small riverstream occasionally used for rafting. The area, called Rahong Pine Forest, is a well-known outdoor facilities center frequently visited by local, casual tourists.

Riding along the short, flat paved section from the bridge took me to the other end of the pine forest, where another field of tea plantation awaited. From there, the road turned to easy climb as I approached the end of Gambung Pass in Pangalengan. For a moment I made a stop just on top of the last climb from Rahong Forest, looking back to the pine woods for the last time and bidding it farewell. It was refreshing day cycling adventure; I knew I will ride there again soon.

A short descent across local settlement took me to Pangalengan main road, the finish line of Gambung pass. Additional short pedalling session took me to the Jembatan Cinta (lit. “Love bridge”) on top of Situ Cileunca. Situated at 1,400 m above sea level, the creek was the largest in Pangalengan region, as well as one among several water reservoir supports for Saguling Dam Powerplant. The water level was low when I got there, most probably due to months of dry season.

Another pedalling session along the hilly main road took me to KPBS Rest Area just before Pangalengan town center. A mozarella nugget and a glass of local yogurt were the meals I ordered there; just enough to satiate intense hunger without bloating the stomach. The yogurt was especially good—in term of taste and price—that I ended up buying a 1-litre package one for my little one back at home. From there, it took a long flowy descent through the main road all the way to Banjaran, followed by 20 kms of flat city riding to get back home. 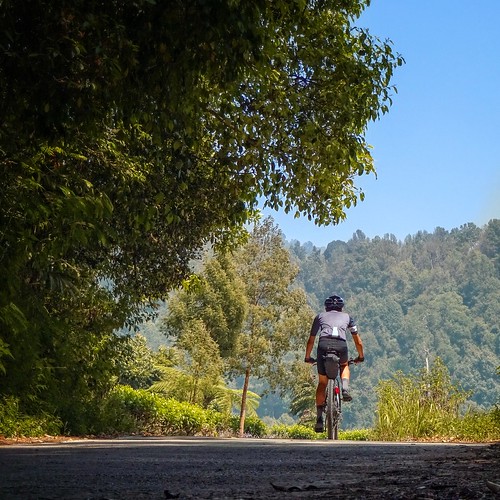 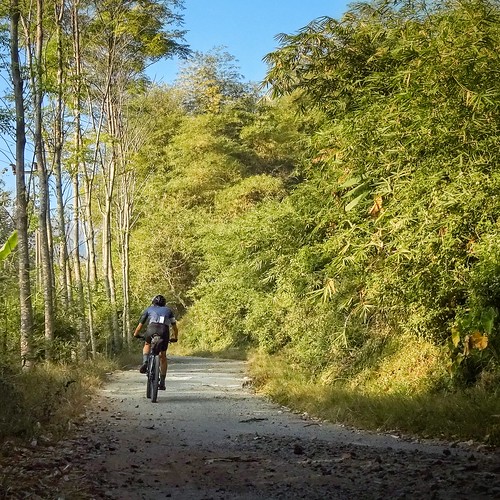 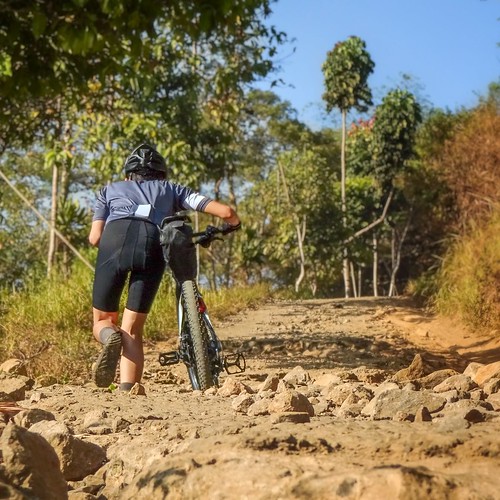 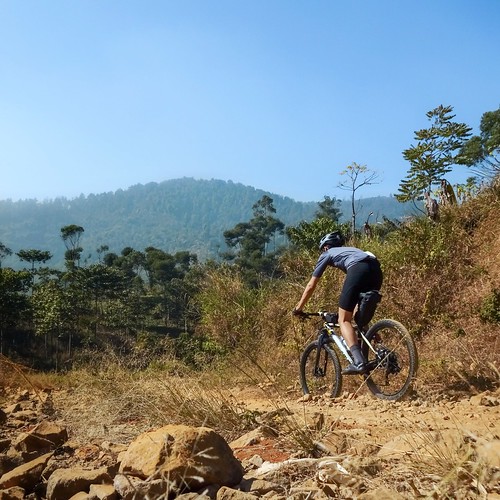 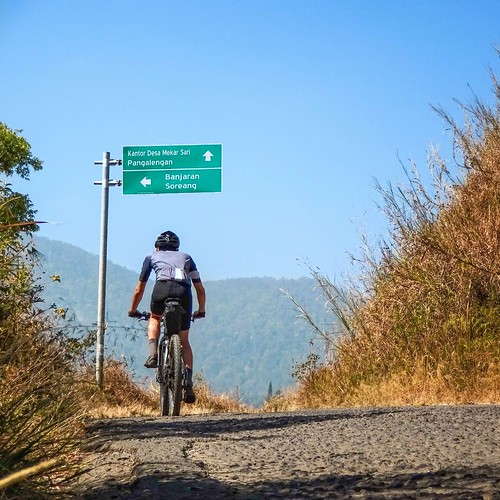 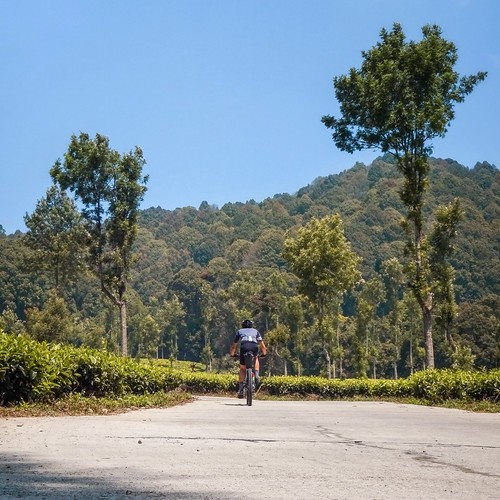 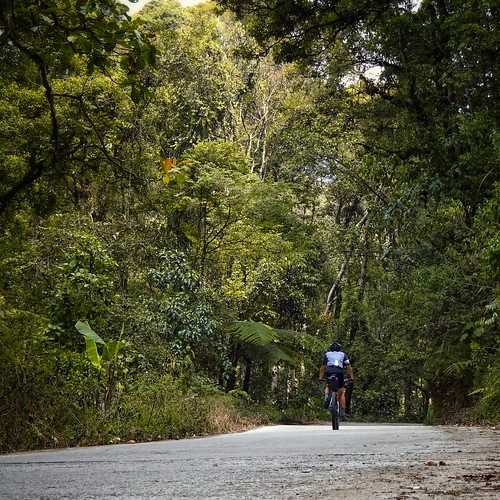 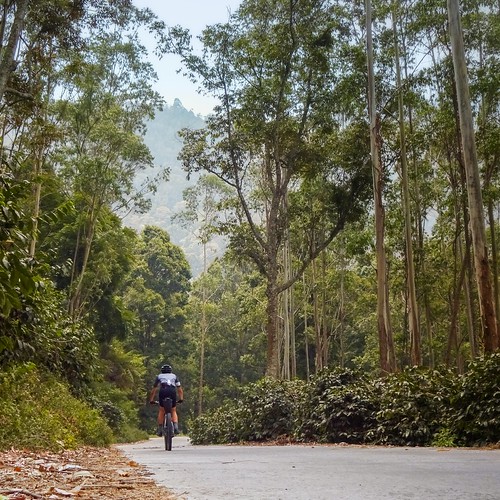 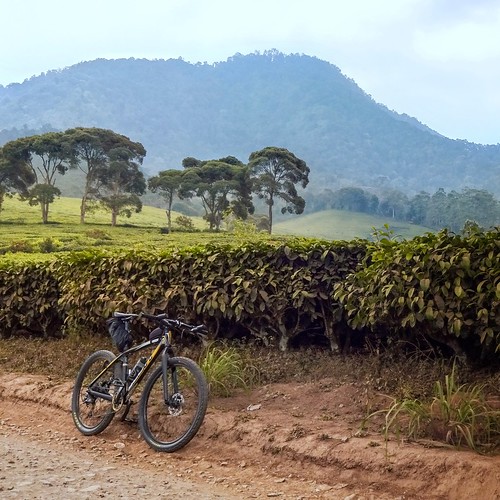 View to Mt. Tilu from Roadside 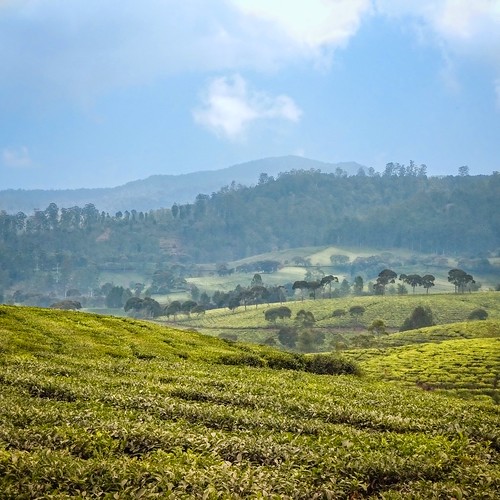 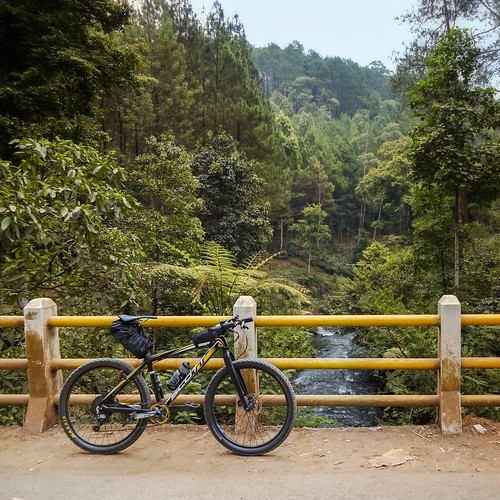 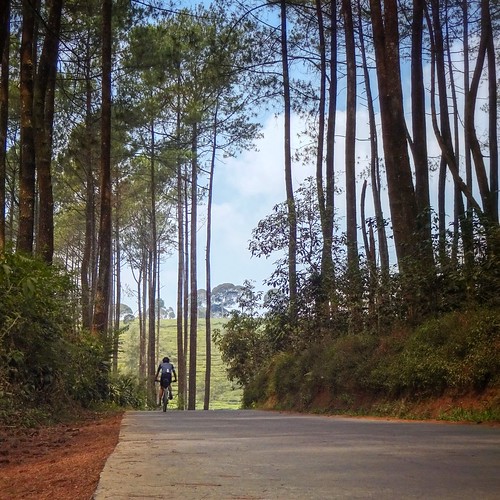 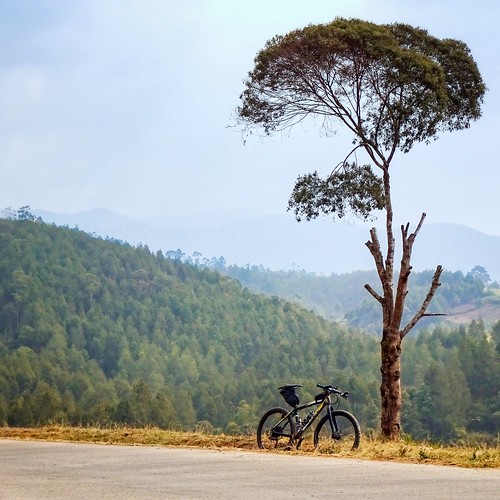 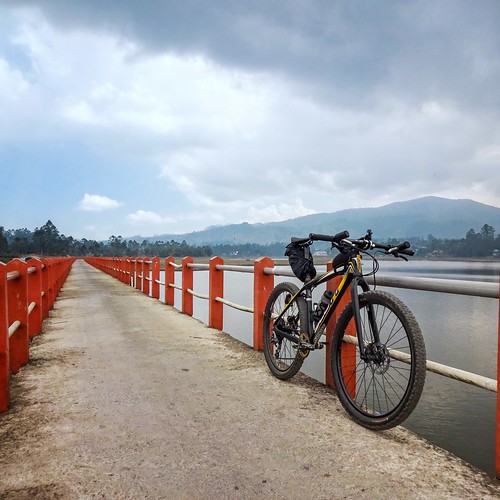 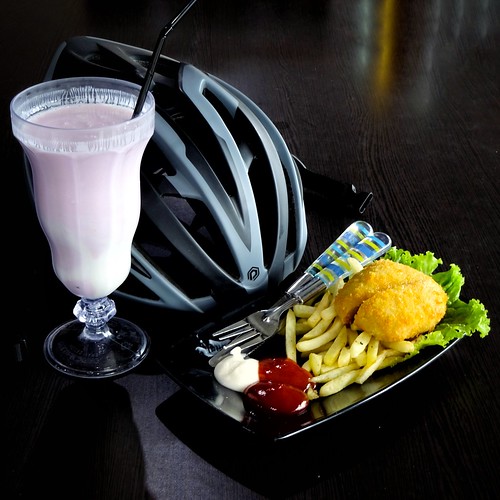